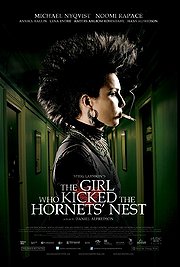 The late Swedish author Stieg Larsson is the literary darling of 2010. His Millennium trilogy -- three novels published posthumously -- has caused an international sensation. I admit that I am among the smitten.

Larsson's novels are engrossing and artful, and his personal story is just as compelling, poignant, and fateful.

The idea that Larsson wasn't alive to experience the monumental popular success of his work is devastatingly ironic. It places Larsson on the outskirts of the pantheon of Van Gogh, Kafka, Dickinson, et al. But unlike Kafka and the divine Emily, Larsson did not chose to try and prevent publication.

Larsson died of a heart attack after climbing flights of stairs to an office when the building's elevator was out of commission.

After his death all three novels were published and still hover at the top of the best seller lists. Larsson has crossed into mythic stature.

The trilogy has been made into three Swedish movies. And presently the first is being remade by director David Fincher in an American version. The latter two novels also are awaiting American film versions.

The first film (and distinctly the best) -- The Girl with the Dragon Tattoo -- was directed by Niels Arden Oplev and is by far the most artistic.

The novel was truncated by the two screenwriters Nikolaj Arcel and Rasmus Heisterberg, but the film still had a powerful vision.

Unfortunately Oplev and his two writers did not do the second and third films. The second movie in the trilogy -- The Girl Who Played with Fire -- was directed by Daniel Alfredson and is more of a potboiler. Much of its lack of dimension and texture is the fault of screenwriter Jonas Frykberg, who did a hack job on the novel.

The third work -- The Girl Who Kicked the Hornet's Nest -- probably is the most difficult of the three to adapt from novel to film. It's full of extended conversations that explore and explain what is happening. It's effectively distended in a way that the film can't capture.

But although The Girl Who Kicked the Hornet's Nest is far less than The Girl with the Dragon Tattoo, it is superior to The Girl Who Played with Fire.

Director Alfredson is back for a second go-around. He's more in command this time out. And the screenwriter Frykberg (this time assisted by writer Ulf Ryberg) isn't as much a detriment as in his first adaptation.

Alfredson uses mise-en-scene more effectively. And the screenplay while not first-rate is not third-rate.

The Girl Who Kicked the Hornet's Nest picks up the perils of Lisbeth with her being hospitalized, because of the brutal confrontation that ended the last film, and then her imprisonment for murder.

Mikael and his lawyer sister (Annika Hallin) have to save Lisbeth from a malevolent caretaker and the system which serves him.

Larsson fills his books with details and information. Screenwriters often come in with pole-axes. One expects them to cut out many scenes, e.g., the 13-page description of a character's service with the Security Police, and a 3-page discussion of corruption in toilet construction in Sweden.

But other changes are bothersome, such as changing the judge from male to female, or cutting a crucial speech in court. Perhaps most problematic is that the suspense and drama is dissipated because of the film's cutting from the court scene to arrests taking place. It is ill-advised.

The movie's version of the huge, vicious thug is so miscast he's no longer frightening and ominous. And the end of the movie doesn't have the resolution of Larsson's book.

Still, it's gratifying to see Mikael and Lisbeth fight the system in all their human vulnerability.

The Girl Who Played with Fire was more coal than flame. But The Girl Who Kicked the Hornet's Nest has some kick.

And we still have The Girl with the Dragon Tattoo, which breathed fire and had lasting sting.

Even if The Girl Who Kicked the Hornet's Nest isn't a major film, it adds to the aura.