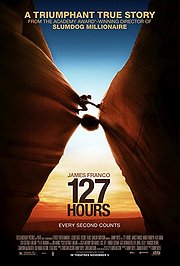 127 Hours is a phenomenal battle between man and nature. In one corner we have wily hiker/explorer Aron Ralston (James Franco); in the other we have massive Blue John Canyon. It's a fight that goes the punishing, bloody distance.

127 Hours gives another meaning to Rocky. Unlike the original movie Rocky, this time the challenger wins the split decision.

It may seem a shaky comparison, but both movies are paeans to survival and the human spirit. We leave the theater elated by their affirmative outcomes.

Rocky is fiction, and 127 Hours is based on actuality, but both are the stuff that myth is made of.

We go to Rocky knowing we're going to see a Philadelphia fairy tale. 127 Hours is an ordeal based on something that actually happened in Utah. Knowing how 127 Hours turns out may give pause to many prospective moviegoers.

It's public knowledge that while hiking in Utah, Aron Ralston fell into a crevice, got trapped when a boulder smashed down on his arm, and he had to free himself in a terrible manner. Who wants to see that? Masochists and one-armed bandits?

I don't think I ever cursed at and with a movie so much. [Under my breath, of course.]

But partway through the intense experience, movie magic occurs. Despite the gruesome circumstances, we get involved. And the ending is rapturous. It's a hard way to a life-affirming conclusion.

Danny Boyle directed and co-scripted 127 Hours. 127 Hours is a better movie than his Oscar-winning Slumdog Millionaire of two years ago. Where Slumdog is forgettable; 127 Hours is unforgettable.

Boyle likes flamboyance. Crowds and split screens. He is still given to coyness, but 127 Hours is effectively grounded.

Sun and water become major characters. Water -- real or hallucinatory -- is a promise of life. Even though Ralston is trapped underground, minutes of warm sunlight become a reviving part of his sustenance. Light is a beacon from nature.

Co-screenwriter Simon Beaufoy -- the screenplay was adapted from Ralston's book -- doesn't get bogged down in backstory. But Aron does travel into an interior life of premonitions, hallucinations, and memories.

Director Boyle deftly changes moods from intense to playful to evocative. Editor Jon Harris artfully took snippets from long takes and spliced them together to create a feeling of both endurance and energy. The sequences have the feeling of duration and humanity.

James Franco is engaging and credible as the independent soul. Others help him, but he saves himself. The theme of human connection is offered, but individual skill and imagination are paramount.

Franco slips from flippancy to desperation to wry knowledge with affecting personality.

In 127 Hours, man endures the human condition and prevails in the natural world.

The prevailing image of 127 Hours is not darkness.