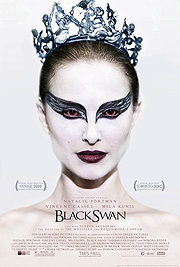 Black Swan is balletic and bombastic. It soars and bumbles, pirouettes and postures. It fights a featherweight war with heavyweight pretensions.

The war is in the mind and body of a young prima ballerina Nina (the not-so-young 29-year-old Natalie Portman). Nina gets the leading role in Swan Lake and is possessed by a fierce struggle between her innocent side -- the White Swan -- and her dark side -- the Black Swan.

Thomas Leroy (Vincent Cassel), the arrogant artistic director of the ballet company says she is ideal for the White Swan, but warns that she may not be able to dance the Black Swan, because it's a side of her she never has let out. He tries to provoke it into action whatever the cost. He tells her, "Find your own pleasure."

The two sides of the vulnerable Nina get locked into a bitter, sometimes brutal struggle for existence.

Darren Aronofsky is a clever director, but grace is not his forte. Swan giblets are more his fare.

Aronofsky loves doubles -- doppelgangers -- and Black Swan is full of mirrors and windows that reflect images of Nina. There are multiple Ninas. On walls, in subways, in hallways.

What is actuality? What is fantasy? What is fake? The diamond earrings in The Black Swan are fake. Does one abscond with something true or fake?

The casting of The Black Swan is intriguing. Barbara Hershey, who plays Nina's mother Erica, is made up to resemble Nina. The actress herself has had an erratic career and personal life.

Another actress whose career plummeted but is now resurfacing is 39-year-old Winona Ryder, who plays Beth the star whom Nina has replaced in the ballet company.

There are several piquant ironies in the casting. Bring the baggage in with the ballet.

Aronofsky works in bold -- at times wild -- strokes. And therefore his films provide the opportunity for bravura performances.

Aronofsky also put Rachel Weisz (his 9-year partner and the mother of his son) through ponderous paces in The Fountain (2006). Aronofsky and Weisz have recently split up. Talk about fractured reality.

In Black Swan, Natalie Portman has a tours de force role as the dancer fighting madness and struggling with identity, pulled in different directions.

Vincent Cassel plays the symbol of authority in his role of the tyrannical master of the ballet company. Mila Kunis plays the free spirited rival from San Francisco who threatens and unleashes the impressionable Nina.

The screenplay is credited to three writers, which might give one pause.

In various interviews the well-educated Ms. Portman keeps emphasizing that film is motion, not words. But language does matter. In Black Swan it's occasionally revealing, as when Nina cries to her mother, who is vicariously living through her, "He picked me, Mommy."

Aronofsky couldn't fit werewolves into tutus. So he went with swans.

In The Black Swan, these swans howl.