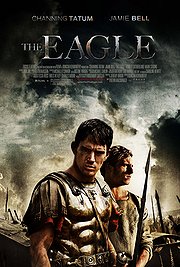 The Eagle is what an action-adventure should be -- gripping, literate, and entertaining.

It's a volatile tale that transports us to a faraway place and a faraway time. Although rooted in tradition, it avoids most of the cliches, and actually has a surprise or two. Best of all, The Eagle has character -- and humanity.

The Eagle is the story of a young Roman, Marcus Aquila (Channing Tatum), who in 140 AD becomes commander of a garrison that is "too small to have a paymaster."

He earns his spurs -- ah, armor -- during a raid and his response of derring-do. Unfortunately, he is struck down. Then he is taken a long distance to the home of his patrician uncle (an appealing Donald Sutherland). He is discharged from the military service -- with honor but not fulfillment.

Aquila is obsessed with redeeming the ruined reputation of his father, who twenty years before had led Rome's Ninth Legion of 5,000 men into North Britain. None returned, and his father's name is stained in Rome by accusations of failure and cowardice.

After the loss of the Ninth, Hadrian had built his wall -- at "the end of the known world."

Aquila and his slave Esca (Jamie Bell) -- who may or may not be trustworthy -- embark on a seemingly hopeless trek beyond the wall into Caledonia (Scotland). Aquila is committed to recovering the lost golden emblem of the Ninth Legion. It's a precious symbol of Rome. No one knows where it is. The two vulnerable seekers have to travel through lands full of savage hordes on their quest.

It struck me after seeing The Eagle that it had a lot in common with the western. In its two-man pursuit of a something precious that had disappeared, it reminded me of The Searchers (1956).

Later I found out that Channing Tatum had made the connection. Tatum is no John Wayne, and Jamie Bell is no Jeffrey Hunter, but Tatum is credible and Bell is better than Hunter.

Jamie Bell excelled as the young ballet dancer in Billy Elliot (2000). But he lost his charisma -- he appeared shrimpy in Jumper (2008). In The Eagle, Bell has regained his potency. He is muscular and human as Esca.

Unlike The Searchers, The Eagle has no women in major roles. But it has its assets for them.

The Eagle is a movie in which all the eye candy is for women. Buffed Tatum and Bell might appeal to females.

I think the late British novelist Rosemary Sutcliff would approve. The Eagle is adapted by Jeremy Brock from Sutcliff's novel The Eagle of the Ninth (1954).

Scottish director Kevin Macdonald as a boy was delighted by the novel. With boyish enthusiasm, he now on film creates the rousing, grueling adventure about redemption.

Battle scenes in movies can be problematic -- will the attacks in Starship Troopers (1997) ever end? Which Transformer are we rooting for? Will the spurting ever stop in tv's Spartacus?

Macdonald avoids the more graphic elements, and his battles are basically chaotic and frenetic. It's hard to gauge how effective they will be for different audiences. But they do provide an energy.

Anthony Dod Mantle's cinematography is visually powerful. it's full of arresting images: the eyes of an owl; two men riding far in the distance across a great expanse; a face washed of its paint in its watery grave.

I hope The Eagle can reach a wide audience, because I think it will satisfy many of them.

It comes from a distant world before simply joining up made one a "hero."

It may seem dated to some, but The Eagle espouses the old, veritable values of trust, loyalty, honor, brotherhood, and commitment. All in a traditional, updated, mix.