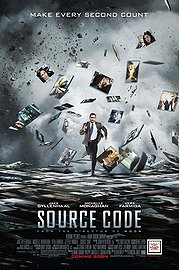 It's obviously a reason to take a train ride over and over.

At first upon seeing the movie, I thought Source Code might be some new kind of doughnut at Dunkin' Donuts. There's a well-placed Dunkin' Donuts bag on a train seat, and the characters keep stumbling after coffee -- Dunkin' Donuts coffee, I presume.

Throughout Source Code we keep returning to that nicely promoted seat. And in one hectic action scene, there's an almost subliminal shot of Dunkin' Donuts advertising on a wall of the train.

Though it has holes, Source Code is not a movie about doughnuts. It's the story of Capt. Colter Stevens (Jake Gyllenhaal) who -- in the body of another man, a history teacher -- finds himself repeating an 8-minute experience over and over until the train always explodes killing all on board. Each time he returns he has the knowledge of his previous trips.

The repeated experiences allow Stevens to hunt the bomb and the bomber before the inevitable explosion.

The first time he wakes up across from the girl with the Dunkin' Donuts' bag on her seat -- Christine, pleasantly played by Michelle Monaghan -- he is anxious and bewildered. He doesn't know her, but she talks to him as an old friend.

Stevens is part of a military experiment which allows for time reassignment -- one can go back and learn from the past, so that he can prevent something in the future. The mission for Stevens is to go back to try to find out who the bomber is, because the bomber has announced he is going to set off a dirty bomb in Chicago. No, he doesn't play for the Cubs.

The sly product placement is only a McMuffin -- I mean a McGuffin.

Jake Gyllenhaal is the movie's great asset. This spring has been the season of three movies made worthy by their leading men, who carried them through perilous plotting. Matthew McConaughey in The Lincoln Lawyer, Bradley Cooper in Limitless, and now Gyllenhaal in Source Code all made their movies better than they might have been. They each exhibited an artful ability to humanize their characters -- good guys under extreme pressure -- in a dehumanized world of gamesmanship.

Each gave a compelling, engaging performance that elevated his movie above its very real potential for mediocrity.

The rest of the cast of Source Code is solid. Vera Farmiga is appealing and credible as the Air Force officer who gives orders to Stevens. She adds welcome range to a slim part.

Jeffrey Wright -- who could be in a remake of Dr. Strangelove -- plays the obsessed head of the Source Code project. A clever bit of casting is that Scott Bakula is the voice of Stevens' father. Bakula starred in the tv classic series Quantum Leap.

I must admit I left Source Code with visions of Dunkin' Donuts in my head. But I did not go to the chain Dunkin' Donuts; instead I went to Ronald's doughnuts.