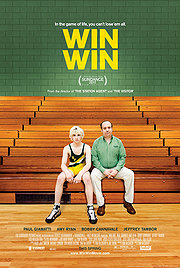 Only three feature movies that he wrote and directed have been released. The first two were serious contenders for top-ten-of-the-year lists.

McCarthy's The Station Agent (2003) made several top ten lists. McCarthy's The Visitor was my favorite film of 2007, and also made many lists.

With Win Win, McCarthy goes back into his own actual past. Joe Tiboni -- who wrestled with McCarthy in high school in New Jersey -- is credited with writing the story. McCarthy wrote the screenplay and directed.

Win Win is the story of Mike Flaherty (Paul Giamatti) whose law practice is going broke. He is anxious to protect his wife Jackie (Amy Ryan) and their two children, so in a moment of desperation, he agrees in court to be custodian for a declining old man (Burt Young) and unethically takes the monthly checks but doesn't do what he agreed.

The old man's grandson Kyle (Alex Shaffer) suddenly shows up from Ohio, and Mike and the reluctant Jackie decide to take him into their home for a brief time.

It turns out that Kyle is a great wrestler, and Mike happens to be a part-time wrestling coach at a high school. Voila! Soap on a mat.

The plot does sound trite, but McCarthy's deft touch raises it to an engaging human drama. The title still is a bit much. A better title might be Take Down, but Win Win is one of McCarthy's concessions to the marketplace which yearns for uplift.

McCarthy's usual tone is quietude with moments of volatility. He's very much a humanist, and it serves his characters well. An accomplished actor himself, he knows what makes for fictitious life and vitality.

McCarthy, as always, is able to inject amusement, geniality, and decency into his sequences. An inconsistency may be the quick changes in Jackie from dubiousness to generosity and back. Her character lurches. Ryan is fine, but her role could use another edit.

And McCarthy's ending is, perhaps, a little abrupt. But overall, Win Win is a pleasant, enjoyable experience.

Paul Giamatti, who gave into hamminess in Barney's Version (2010), has regained his patented, earthy, quirky humanity in Win Win.

Amy Ryan is engaging as Jackie, and novice actor Alex Shaffer, has a freshness as Kyle. Before his wrestling career was ended by an injury, Shaffer won a New Jersey State wrestling championship.

Bobby Cannavale, who appeared in McCarthy's The Station Agent, portrays Mike's (Tom's) flamboyant friend. And Burt Young is convincing as the vulnerable grandfather.

McCarthy has a kinship with another Jersey guy, Jon Bon Jovi, and like JBJ he is able to have affecting appeal.

In Win Win, Jackie has a JBJ tattoo from her younger days, and McCarthy utilizes Bon Jovi's Have a Nice Day, as partial anthem for his film.

Bon Jovi would be proud.