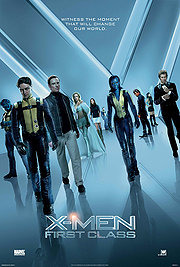 On the surface, prequels may seem to be the final attempt to drain the last dregs from a franchise.

But, on occasion, a prequel can not only revive a franchise; in some cases, it can enhance it.

X-Men: First Class brings freshness and savvy to the X-Men franchise. Like Star Trek, one of the best movies of 2009, the latest X-Men is able to invest its popular series with an entertaining vitality that one might not expect.

X-Men: First Class goes back to the formative, younger days of the gifted Mutants. We see Charles as a boy (Laurence Belcher) and his sister Raven as a girl (Morgan Lily).

And we witness the horror of young Erik (Bill Milner) and his mother at a German concentration camp in Poland at the hands of Nazi doctor Schmidt (Kevin Bacon), who later becomes Sebastian Shaw, the major villain of the film. His devastating effect on the boy Erik leads to Erik's becoming Magneto.

As young adults, academic Charles Xavier (James McAvoy) and Erik Lehnsherr (Michael Fassbender) become friends and allies. They are recruited, along with other Mutants, by CIA agent Moira MacTaggert (Rose Byrne) to use their special talents to help the USA and eventually prevent the Cuban Crisis from becoming total nuclear war.

The heinous Shaw is about to initiate this war. Each of the Mutants evolves towards what we know they later will become.

A few X-Men purists are bothered by some of the time-lines in X-Men: First Class, but they shouldn't have any effect on the vast majority of viewers.

Perhaps the best aspect of X-Men: First Class is its surprises. That it's unpredictable at times is engaging. The writing by Ashley Miller, Zach Stentz, et al. has kick.

Still active and obviously stated is the basic theme of the outsider (gay). One official cries, "You want the Mutants. They're right through that door. We're the normal people."

The direction by Michael Vaughn has clarity and punch. One might quibble that the end of the world should not seem anti-climactic. But when the first Armageddon is prevented, another one comes along.

It's as though Vaughn had all these extra missiles, so he had to release them and fill the screen with pyrotechnics. Charles Xavier preaches "control," but Vaughn doesn't listen to him. Who can resist another series of explosions? Vaughn is the Magneto of directors.

The acting gives X-Men: First Class energy and verve. And there's a funny cameo with Hugh Jackman, which uses up the single allotment of a word to keep the film rated PG-13.

Wolverine and Lady Gaga might get together in the next mutation.

James McAvoy makes a cool and proficient Charles Xavier, and Michael Fassbender -- a younger Jon Hamm -- is credible as the evolving Erik battling his demons.

Jennifer Lawrence and Rose Bryne are very appealing. Nicholas Hoult, as Hank, also has appeal as he continues his career from About a Boy (2002). Kevin Bacon smacks his lips as Schmidt/Shaw, and January Jones is lip-smackingly lovely as his evil helpmate.

The adventures of Mutants -- old or young -- are always fraught with danger and derring-do.