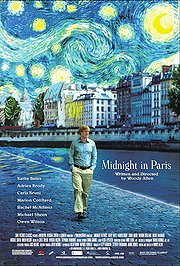 Woody Allen's Midnight in Paris is a luminous gambol of imagination and memory through the flickering City of Light. It's a pleasant dream.

Woody's Paris is a Cole Porter song, a Sidney Bechet instrumental rendition, a line of Hemingway speech, a Pablo Picasso painting -- an intoxicating melange of talent and lore.

It is pink blossoms and wet streets. It is Kubla Woody.

Midnight in Paris is the tale of self-described "Hollywood hack" Gil (Owen Wilson), who is trying to write a creative novel. He is visiting Paris with his fiancee Inez (Rachel McAdams) and her parents -- her father (Kurt Fuller) is on a business trip.

After the stroke of midnight, Gil is transported to the Paris of the 1920s, where he rubs psyches with Fitzgerald, Hemingway, Gertrude Stein, Picasso, Dali, Luis Bunuel, et al. (There's a playful allusion to Bunuel's classic The Exterminating Angel, 1962).

Each night Gil returns to the same spot on the isolated Paris street and is picked up for the latest mesmerizing sojourn.

At one of the nightly gatherings, Gil meets provocative fashion designer Adriana (Marion Cotillard) -- who has captivated many of the great ones, and Gil becomes smitten with her.

After each night's fanciful visit, Gil returns to present day Paris, where no one shares his dreams. Will he have to surrender them in the modern world?

In Midnight in Paris, Woody Allen has his patented targets -- pedantry, materialism, right-wingers, and Ugly Americans. But he also has his vision of the past.

He's occasionally coy, but his figures from 1920s Paris are engaging. The best are an exuberant Dali (played with great relish by Adrien Brody), Adriana (an alluring Marion Cotillard), and an earnest Hemingway (played by Corey Stoll -- from Law & Order: LA).

Most of the famous characters have an appealing piquancy. A few misfire. I half-expected Gertrude Stein (Kathy Bates) to arrive with chicken soup.

The two characters with whom Allen most falters are the Fitzgeralds -- Scott and Zelda. I went a lot of places in my life with Scott Fitzgerald, and he was never vapid as he is in this movie. Tom Hiddleston -- who was a mediocre Loki in Thor -- is nondescript as the brilliant writer. Did Woody actually have him say, "Old Sport"? Yuck. Even if it's satiric, it's pretty feeble.

But just because you've played one neurotic doesn't mean you can play another. Alison Pill may be more appropriate for a Holiday Inn Express commercial than part of a well-known galvanic couple.

The actor who is ideal in Midnight in Paris is Owen Wilson; he makes it as much his movie as it is Woody's. He is marvelous as sensitive, perplexed, evolving Gil. It's Owen Wilson's best performance.

Wilson as Gil even survives a half-written relationship with fiance Inez. Allen seems to care little about it, so it's sketchy and not believable.

There is nothing in the film to suggest Gil and Inez would go out on a second date, much less get engaged to get married. About all we know of them is that he gave her a moonstone necklace, which she hates. Ok, they're from California and superficial. Been there, seen that.

Michael Sheen gives a nice one-note performance as the pedantic professor who once taught Inez, and in Paris still impresses her. Rachel McAdams as Inez is limited to spinning.

But when Woody Allen captures a thesis, he can soar. As he did in Vicky Cristina Barcelona (2008), Woody soars in Midnight in Paris.

He suggests that no matter what era you're in you are unaware of its value, so you look back and see a better past. And the past, of course, is a selective illusion.

In Midnight in Paris Woody Allen plays a mellow reverie that makes us sway to imagination.