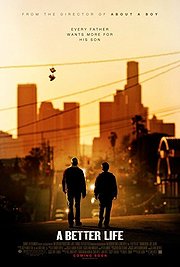 A Better Life is steeped in decency.

But how does decency survive in an indecent world?

Carlos Galindo (Demian Bichir) is an undocumented, Mexican day laborer, who works as a gardener in the posh neighborhoods of Los Angeles.

He is a single parent who is committed to his son Luis (Jose Julian). But Luis is blase and something of a slacker, who doesn't understand his father's background or sacrifices.

Luis, in East L.A., often skips school, which is something like a prison. It's not fertile ground. He is reaching the age of gang initiation, but he hasn't committed himself to anything yet.

His father is a tree-like pillar of strength. Even though Carlos is faced with severe struggles, he only lapses one time -- into alcohol, when depressing misfortune strikes. But Carlos lives day to day, with the constant threat of deportation.

As one tattooed gang member asserts about the status of their ethnic minority in the United States, "They know what to do with us -- lock us out or lock us up."

Chris Weitz, who directed the engagingly human About a Boy (2002), returns to his liberal humanism in A Better Life.

Weitz is like Tom McCarthy and A Better Life has a lot in common with McCarthy's The Visitor (2007). Both feature individuality caught up in a dehumanizing system.

The screenplay of A Better Life is by Eric Eason from a story by Roger L. Simon. Weitz's writers do allow authorities to have a few, fleeting human moments, but generally institutions are unsympathetic, demeaning, and absolute.

Demian Bichir humanizes Carlos, the sober, earnest, determined man of the soil. It is a sensitive, thoughtful performance. Jose Julian also is effective as a young man growing up in a world that seems to offer him little.

Director Weitz idealizes his central character, but keeps him grounded in the earth.

The string music by Alexandre Desplat -- who just did Harry Potter -- is appealing and evocative.

A Better Life is a vision of compassion.

As Carlos says, the United States is "home."

Despite what others might scoffingly declare, Weitz seems to agree.