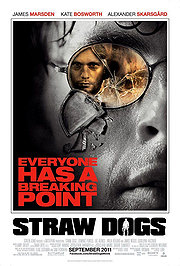 If Sam Peckinpah were alive today and read that director Ron Lurie had remade his Straw Dogs, he would have scowled his famous scowl.

When he heard that Lurie had supposedly tweeted, "one of the reasons for remaking was to turn it into a feminist film," Sam would have coldcocked Lurie with a single punch.

I knew Sam, and of course no one was like him. He was one of a kind. Lurie is of the masses. He's no Sam; he's Spam.

Sam was a brawler -- he'd never back down, even when he was wrong.

Lurie showed he runs for cover when he wrote and directed The Contender (2000), which was about a woman who was picked to replace a vice president who had died.

She had to undergo harsh scrutiny because of controversy about sexual activity in college. She stands up and refuses to speak about it, which shows principle. But at the end, Lurie backs down and has her admit it wasn't her, thereby sanitizing and cheapening his movie.

Straw Dogs is about a couple who move to an alien place where violence snaps their preconceived notions, and they have to face a life-changing, ugly reality.

Both versions of Straw Dogs are adaptations of a novel by Gordon Williams.

Lurie once was a movie reviewer. What's next -- director Pete Hammond?

British louts are replaced by Southern rednecks. And the rape scene, which was culturally shocking in 1971 in its depiction and emotion, has its sensibility changed by Lurie.

Dustin Hoffman was the academic David in the Peckinpah film; James Marsden does not have the same anxious, vulnerable quality that Hoffman had.

Sam Peckinpah was a difficult man, but he was an artist. Straw Dogs is not among Peckinpah's best films, but it's still one of a kind. It was unique, visceral and artistic.

And anyone who says that Sam hated women hasn't seen The Ballad of Cable Hogue (1971) in which Sam cherished a feminine vision.

Why remake Straw Dogs? Why do remakes? Occasionally they're by artists, but usually they're just commercial exploitation. Was Julia Ormond really supposed to compete with Audrey Hepburn in the remake of Sabrina (1995)?

Artists, such as Gus Van Sant who remade Hitchcock's Psycho (1998), try to give their own personal artistic slant to classics, but it's always a longshot.

Is Marty Scorsese going to remake Orson Welles's Citizen Kane (1941) with Leonardo DiCaprio? I doubt it. Scorsese -- an artist himself -- has too much respect for the history and art of film. Lurie does not. Leonardo, stay away from Ron.

American genres -- like the western -- are fodder for continual remakes.

Let Ron Lurie give a feminine slant to the O.K. Corral. And he can tweet about it.

Can you imagine Sam Peckinpah tweeting?