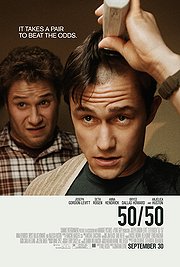 50/50 is a movie in which the protagonist is very human, and his best friend is obnoxious.

It's also an apt study in acting. One actor is human; the other is obnoxious.

50/50 is the story of 27-year old Adam (Joseph Gordon-Levitt), who contracts a rare form of cancer. He is told that with chemotherapy, he has a 50% chance of survival.

His girl friend (Bryce Dallas Howard) tries to do her best to be supportive but is fallible. [This gives the movie a chance for a little misogyny.]

Adam goes to a young trainee in therapy (Anna Kendrick), who is awkwardly inchoate in her dealings with him.

His mother (Angelica Huston) is willful, and has father (Serge Houde) has Alzheimer's.

So to save the day, his best friend Kyle (Seth Rogen) lumbers in. [Rogen's actual friend Will Reiser wrote the screenplay.]

Adam has to deal with his world in drastic flux.

When I first saw Joseph Gordon-Levitt in a movie -- Mysterious Skin (2004) -- I made a prop bet in the casino in my head that some day, Gordon-Levitt would win an Oscar.

Gordon-Levitt was intelligent and had the enigmatic humanity that James Dean, Brando, Nicholson, and Heath Ledger had as young actors.

Gordon-Levitt later gave an appealing, substantial performance in The Lookout (2007), where I assume he studied the brilliant, human performance that Jeff Daniels gave.

In 2009 Gordon-Levitt's career seemed to change when he appeared in the cutesy indie (500) Days of Summer.

One hoped that Gordon-Levitt would find a director like De Niro found Scorsese. Along came Christopher Nolan -- could he be the one? Gordon-Levitt appeared in Inception (2010), running around wildly. It was a role 100 actors could have done.

I threw away the ticket in my head.

Gordon-Levitt salvaged some humanity in the outrageous Hesher (2010) and a lot in 50/50.

As Adam in 50/50, Gordon-Levitt is low-key, but very human. His expressive face shines and darkens. Director Jonathan Levine brings him back to simple, expressive humanity.

Director Nolan has called on Gordon-Levitt again. He is in Nolan's The Dark Knight Rises (due in 2012). Will Gordon-Levitt rise or fall among the gaudy special effects?

Actor Seth Rogen is another matter as Kyle. If you thought Kramer's barging in on Seinfeld was a continual riot, you'll probably like Rogen's shtik.

Rogen has another patented role as gregarious buffoon -- the class clown and clod.

Adam says to Kyle, "We're not in high school anymore." Maybe not, but Rogen -- approaching age 30 -- seems destined to be a life-long frat boy.

Joseph Gordon-Levitt seems back on track. I've picked the ticket out of the trash in my head. [What a straight line!]