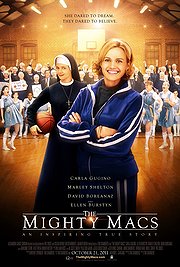 Who is the target audience for The Mighty Macs -- 70-year old women?

It's G-rated (when was the last time a movie drama was rated G?). The Mighty Macs doesn't have a single curse word. A movie in which coaches and players never curse should appeal to oldsters who think contemporary movies are full of foul language.

But those folks don't go to the movies at all anymore. They bitch about them, but The Sound of Mucous was the last movie they saw.

The Mighty Macs -- based on actual happenings -- is the story of how young, novice Cathy Rush (Carla Gugino) coached a women's basketball team at Immaculata, a small Roman Catholic women's college outside Philadelphia, to national acclaim. She brought a moribund program to vibrant, symbolic life.

I'm a Philly guy -- raised watching the best college basketball in the country at the Palestra, on the University of Penn's campus. It was the home of the mythic Big Five.

I attended Villanova -- Don McLean, the late Jim Croce, and Bradley Cooper all got away, but I didn't.

Immaculata was just down the pike. Harcum was more my speed.

The Mighty Macs was an indie made in 2007, and it has taken four years to get national distribution.

What drives me nuts is how movies about sports' tradition botch the reality. The Blind Side (2009) turned the hood into Mr. Roger's Neighborhood. Invincible (2006) increased Philadelphia Eagle Vince Papale's classic td run to fraudulent length.

And in the movie The Mighty Macs, one of the stars Gayle Moore (Bianca Brunson) is black, but the original team had no black player. So much for authenticity.

It's smarmy that the publicity photos for the movie hide the black girl in a shot of the players on the bench listening to the coach. This change in reality must have been done for lame commercial reasons, but it's pretty disgusting, contriving authentic history, and then trying to hide it.

Tim Chambers, who directed and wrote (with Anthony Gargano) The Mighty Macs, has created a feel-good movie without much conflict. That's not Philly basketball -- male or female.

There's no flesh on the bones of David Boreanaz's role as Cathy's husband Ed, who is an NBA referee.

The Mighty Macs takes a glimpse at the relationship between Cathy and Ed, but it has little substance and little chemistry.

Hoosiers (1986) is the gold standard of films about basketball. In that classic, each game was a dramatic short story. The games in The Mighty Macs are lackluster.

One of the executive producers of The Might Macs is Pat Croce, a basketball icon in Philadelphia for his past ownership of the 76ers in the NBA. But his flair is not invested in The Mighty Macs.

You don't have to see this movie right away. It will make you stand up and yawn. No Rush.

I enjoyed The Mighty Macs, but didn't admire it.

The Mighty Macs has its pleasant moments, but it does not have the authentic taste and aroma of Philly Cheese Steaks.

Instead, it's as generic as McDonald's Big Macs.