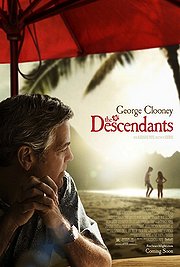 The Descendants calls out for Clark Griswold and his brood -- The Griswolds in Hawaii.

This time around George Clooney plays the clueless dad.

The Descendants is the story of a man and family and island in crisis. The man is in focus, the family gets in the way, and the island is just present. No island is bigger than Clooney.

Mike King (Clooney) has to execute the living will of his wife, as he also is deciding the fate of the oceanfront land on Kauai. All his in-laws swirl around him in his time of trial.

His father-in-law (an effective Robert Forster) is a hard case. His mother-in-law, of course, has Alzheimer's.

He has to try to cope with two rambunctious daughters -- teenage Alexandra (Shailene Woodley) and her younger sister Scottie (Amara Mille). And he has to deal with his wife's previous escapades.

It's all in the family.

The movie starts with Elizabeth King (Patricia Hastie) flashing a Clooney-like grin. No wonder that in an accident she is quickly rendered inanimate in a coma. No one smiles more than George in a Clooney film. And the plot doesn't offer him much chance to grin.

In fact, we see George cry. Maybe that's why reviewers think George is giving a great performance. You should cry, Chevy.

I'm not a member of the rabid George Clooney fanclub, although I admire some of his work, such as Michael Clayton (2007) and Good Night, and Good Luck (2005). I'm left cold by a lot.

In The Descendants, as usual in Clooney movies, there are more close-ups of him than anyone since Garbo. The Descendants concludes with a lengthy shot of Clooney on a sofa. At least this time he shares the shot, unlike the godawful, interminable shot at the end of Michael Clayton in which he rode in the backseat in a car.

I have a friend who knows Clooney, and I always wanted to ask him if besides being a merry prankster is GC also an egomaniac?

I really wanted to care about Mike King, et al. in The Descendants, but I still can't relate to contrivance and banality. Give me irony.

A lot of The Descendants reminds me of "reality tv." I can't relate to those folks either.

About the only character I related to at all was Alexandra's friend Sid (Nick Krause), who spent most of the film as a bemused onlooker. But I was not much bemused.

Who's the target audience for The Descendants -- pseudo-sophisticates? I hoped for wit and charm. I'm not hoping anymore.

Alexander Payne directed, and coscripted The Descendants with Nat Faxon and Jim Rash, "based on" the novel by Kaui Hart Hemmings.

It's ironic that Payne reportedly turned down Clooney for his Sideways (2004). Instead he chose Paul Giamatti, who gave a terrific performance in a terrific film.

I think Giamatti would have made The Descendants a better film. He has an edge and a reservoir of neuroses that Clooney simply lacks.

The Descendants is about grief and forgiveness, fate and decision. One character forgives another, another has to forgive another, and so on.

George, I forgive you.

The Men Who Stare at Goats