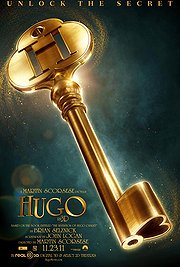 Hugo is a love affair -- palpable and personal -- between director Marty Scorsese and cinema. It sputters, floats, and soars.

In his boyhood Scorsese was isolated by asthma, but his parents took him to the movies, where he formed a lifelong bond with cinema. While awake, he dreamt in theaters.

All his adult life Scorsese has shared his dreams -- violent and human with us. Now he shares innocence, experience, and transcendence.

Hugo is a tale of two cities -- one in reality, the other in dreamland. As one of the saints of film preservation, Scorsese has taken us into a past that is fragile yet enduring.

Hugo is the story of Hugo Cravet (Asa Butterfield) who hides out behind the walls and in a clock in a Paris station in the early 1930s.

He is alone with a silver automaton, an inanimate memento of his father (Jude Law), a clockmaker who was trying to fix it before his demise. Hugo is on a quest to fulfill his father's wish.

He pilfers small parts -- cogs and springs, etc -- from a toy seller's shop in the station. The toy seller (Ben Kingsley) is an aging, bitter man, a product of a mysterious past.

In the station Hugo meets the precocious enterprising Isabelle (Chloe Moretz), who is ward of the toy seller. She loves literature, and when Hugo says, "Isabelle, do you want to have an adventure," she quickly agrees.

Together they go to the movies. "My father always took me for my birthdays," Hugo says, which obviously has special resonance for Scorsese.

Together Hugo and Isabelle eventually find out the full identity of the toy seller, and movies become real.

In Hugo, Scorsese pays special tribute to French movie innovator Georges Melies, but Scorsese's attention is far beyond one director.

John Logan wrote the script for Hugo, based on a novel by Brian Selznick.

The 3-D effects are evocative -- snow and the automaton float in the theater out to the audience.

Perhaps Scorsese thought more action was necessary for 3-D, so he emphasized the antics of a mean-spirited station inspector (Sacha Baron Cohen), who races with urchins through the bowels of the station. But this inspector is no Clouseau. He gets a bit tiresome.

Asa Butterfield, with wide blue eyes, makes a serviceable Hugo. Chloe Moretz is her usual spirited self as Isabelle. Christopher Lee adds gravity as a station book lender. Sacha Baron Cohen does what he can with the thankless role of the stalking, gawking station inspector. Emily Mortimer is appealing as the object of his gawking.

In the crucial role of the man of movie mystery, Ben Kingsley is both forceful and sensitive.

There are a few problematic elements in Hugo. One is that vintage footage is shown twice, which makes the second sequence less climactic than it should be. The glass-walled movie studio -- "an enchanted castle" -- of Melies is effective. Maybe it could have sufficed for the earlier scene.

And, as in the past, Scorsese seems less than special in his ending. Maybe he wants movies to go on forever, and his endings usually lack the impact they might have.

But the spirit of Hugo is its love of creativity, art, and the movies' wondrous grace.

Like fellow New Yorker and veteran director Woody Allen, Scorsese has gone to Paris to pay homage to the past. Earlier this year Allen's Midnight in Paris was released.

At 69, Scorsese is almost seven years younger than his peer. Both are remarkable cineastes.

This year both masterly directors have made romantic paeans to art and creativity, and located them in the "City of Light."

Both directors look at the past for inspiration. Allen honors artists -- writers, painters, musicians, filmmakers -- of the 1920s. Scorsese's time of art and love is a decade later in the same city.

Hugo is a movie of sweet allusions to movies. It features Melies' classic A Trip to the Moon (1920).

Hugo is a shimmering moonbeam.