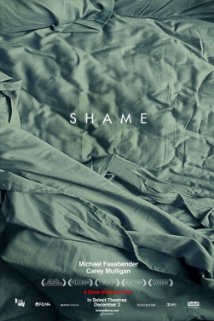 Writers Steve McQueen -- who also directed -- and Abi Morgan have concocted it so they have it both ways.

Brandon (Michael Fassbender), the sexual Bozo, thinks that life and relationships are pointless. That's his mantra. Brandon doesn't dance, and he says his longest relationship was just four months.

So in his blankness, he becomes addicted to sex. He's a rutting fool.

If one complains about Shame's superficiality, the writers can say, "It's about pointlessness."

When you ask, "What is the point of scrutinizing pointlessness? -- they can answer, "Pointlessness has no point." Yikes.

It's Catch-22, or in this case Catch-28 subway station. Brandon takes a lot of rides on the subway in New York.

So they take us down the shaggy path of addiction. As in other movies about addiction -- to drugs or alcohol -- there are standard stops on the road to oblivion.

The decline and deterioration of Brandon have few nuances or insights.

Key the violins and pianos as Brandon goes on his fabled odyssey of orgasms.

The dialogue and posters have double entendres -- "Please come," "The Doctor is In," and passengers are "discharged" from a subway train. Coyness and coitus are bedfellows.

McQueen is a member the Richard Brooks School of Directing. Their films are provocative, blatant, and heavy-handed. Shame is reminiscent of Brooks's Looking for Mr. Goodbar (1977).

Again, McQueen and Abi have it both ways.

Much has been made of the performances of the two main actors -- Fassbender as Brandon and Mulligan as his sister Sissy (clever name). The actors do as much as they can with dissonant, few-note roles.

Fassbender is fit and fitful as the obsessed but superficial Brandon. Screw "minimalism". Carey Mulligan gives a tour de force as the neurotic Sis.

She sings, shouts, cries, nestles, disrobes, and runs the predictable gamut that McQueen has set for her.

After witnessing the movie, I needed rehab.