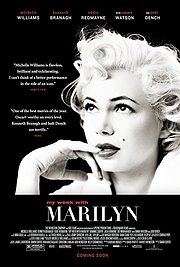 Who are Chris Foggin and Liam Lock?

They were third assistant directors on My Week with Marilyn.

They have the same title as Colin Clark did when he was third assistant director -- a self-described "gofer" -- during the making of The Prince and the Showgirl in England in 1956.

Sir Laurence Olivier was directing and starring in the film with Marilyn Monroe.

Colin Clark became a gofer for Olivier, but because of his youth and stalwart impressionability, he then became an ally and confidant of the mercurial Monroe.

My Week with Marilyn, based on the late Clark's diaries, is a smitten memory of the actress. Adrian Hodges has written a screenplay on the fabulous, erratic week Colin spent in Marilyn's aura.

Maybe someday Foggin and Lock will write about the enchanting alchemy that took place as Michelle Williams became transformed into the divine Marilyn.

Williams doesn't just mimic the troubled, sometimes joyful, actress -- she reaches her heart and soul. She doesn't have the same bust size, but she captures both the pleased demeanor and damaged essence.

Williams who in 2005 had a daughter with the late Heath Ledger -- in a broken relationship -- understands loss. What talent that pair shared.

It's difficult to imagine that Michelle Williams is the same person as the gawky actress who once played the young librarian in rural New Jersey in the memorable The Station Agent (2003). She has evolved into the vivacious actress who brings Marilyn Monroe to vibrant life with style and grace.

Michelle Williams actually glows on the screen. Her performance is incandescent.

Cinematographer Ben Smithard not only lights her, he captures her light. Michelle Williams' Marilyn is a vision of shining vulnerability and fragile glamor.

Eddie Redmayne is credible as the 23-year old Colin, who has stepped down from the upper class world to join the movie community. Director Simon Curtis perhaps lets Colin have a bit too much puppy love and ga-ga expressions, but Redmayne is generally convincing.

Director Curtis can find moments of amusement in incongruous characters and situations. His scene of Colin and Marilyn walking in nature and skinny dipping is awkwardly blissful.

Curtis is beautifully served by Kenneth Branagh as the frustrated Olivier and Judi Dench as actress Dame Sybil Thorndike, who is supportive of the skittish Marilyn.

Hodges' screenplay has some clever allusions. Olivier quotes Shakespeare's Prospero, although it seems a bit much for him to mention the character.

And Olivier quotes a line -- "I feel dead behind these eyes" -- that echoes a line from a play [The Entertainer] -- which Olivier says the playwright John Osbourne is presently writing for him.

Ironically both The Prince and the Showgirl (1957) and the movie version of The Entertainer (1960) flopped at the box office.

And in My Week with Marilyn there's a shot of Marilyn peering over the side of her bathtub that is reminiscent of footage of Marilyn in a pool in her final film, which was never completed or released after she died.

Some people have complained that Michelle Williams isn't Monroe. That's because there are 1,000 Monroes -- everyone has his or her own myth: from Andy Warhol, to Norman Mailer, to Joe DiMaggio, to Joe the Barber to Josephine the hair stylist.

Marilyn Monroe is a beacon to all kinds of people. I once saw two men kissing at her grave site in Westwood, where I've visited more than once.

Marilyn was and is chameleonic -- from little girl lost to Hollywood's greatest sexpot. From angelic demon to medicated child. She became a product hawked by soulless manipulators. She succumbed to the legend.

Director Howard Hawks told me that he saw Monroe at parties sitting alone. Without a screen, she could be a plain Norma Jean. On screen, she was enticing Marilyn.

In her ravishing performance in My Week with Marilyn, Michelle Williams shows that Marilyn lives. And she still haunts.