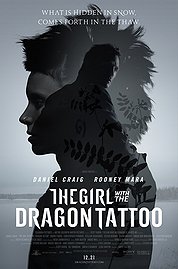 David Fincher's American version of The Girl with the Dragon Tattoo is a powerhouse of a picture.

My favorite film of last year was the Swedish version of The Girl with the Dragon Tattoo -- based on Stieg Larsson's first book of his Millennium Trilogy.

I enthusiastically related to the myth of Larsson and the irony that he died before any of his three novels were published. They sold millions around the world.

The Swedish version of The Girl with the Dragon Tattoo had the bold, artistic direction by Niels Arden Opley. [Unfortunately he didn't direct the next two films of Larsson's Trilogy, and they are inferior to his work.]

The Swedish The Girl with the Dragon Tattoo had an inviting, credible performance by Michael Nvquist as journalist Mikael Blomkvist. But its greatest asset was the brilliant performance by Noomi Rapace, as the abused, Goth computer wizard hacker Lisbeth Salander.

The Swedes had prevailed.

But build it and they will come. Along came the Americans.

Fortunately, the man who directed the American version of The Girl with the Dragon Tattoo is David Fincher. Fincher is a perfectionist who knows the dark side; he directed Se7en (1995). Maybe this time he had collected enough power to not have his ending changed by the studio.

Over the years Fincher has gathered a gifted, proficient assemblage of technical talent. And his longtime producer Cean Chaffin still is with him.

Now may be Fincher's turn. He has a credible shot at an Oscar.

(Daniel Craig) who is hired by an aged mogul (Christopher Plummer) to try to find out what happened to his great-niece, who vanished 40 years ago.

The intrepid investigator enlists Lisbeth Salander (Rooney Mara), a brilliant computer hacker, who has awful issues of her own. They create a tenuous bond and battle fearsome danger as they seek the truth.

What distinguishes Fincher's film is its power -- at times excruciating. Its sequences of sexual abuse and its aftermath will be too strong for some viewers. But these scenes have potent impact.

The soundtrack should win an Oscar. It's terrific -- full of screams. The screams come from everywhere: a serrated cutter, a terrified man, a threatened woman, a train.

There's the crunch of feet on snow, the whistle of the wind, the buzz of a floor cleaner, the boom of a night club, the zoom of a motorcycle.

The music by Atticus Ross and Trent Reznor is the pulse of the film -- throbbing, beating, increasing tension, communicating horror.

Daniel Craig is effective as the investigator, but The Girl with the Dragon Tattoo is Lisbeth's picture.

In an incredible feat, Rooney Mara wrests the role away from the unforgettable Noomi Rapace. Mara and Fincher make it her own.

Mara is fiercer, more nude, and even more agile than her talented predecessor. Mara Rooney's Lisbeth Salander is as cold and hard as coal, but she can warm up, and she burns a hole in the screen.

She's a vision in black, with vivid smudges around her eyes, and a wide-eyed, penetrating glare.

Some audiences may balk over the length and complexity of The Girl with the Dragon Tattoo. It's got overlapping plots and subplots and becomes diffuse in the last part.

Steve Zaillian's screenplay returns to the end of the book. I wish he'd retained Larsson's reference to Elvis, but time goes on. Elvis yesterday, "style" today.

And Zaillian's change of the occupation of a key character from a sheep farmer to a money-investor makes the character more contemporary but less interesting, and less Larsson.

But Happy Meal or not, Lisbeth Salander is one tough warrior. She's a powerful force.

I almost got a dragon tattoo myself.

Instead I settled for a Big Mac.