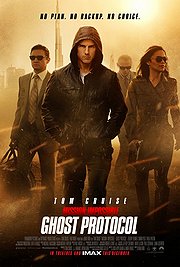 Mission Impossible - Ghost Protocol was was made for IMAX. Be sure to see it on the huge screen.

Just after we're in our seats, the action starts blasting. Immediately, there are four deadly shootings. This is followed by 1,500 punches, 1,000 kicks, 1,000 explosions, and more than 1,000 gadgets. And a lot more shootings.

The USA president has dissolved the MI force since they are blamed for going rogue, with Ethan Hunt (Tom Cruise) committing murder.

Of course, although they are no longer active, on their own the MI force have to try to recover nuclear codes, which a Russian villain (Michael Nyqvist) is about to obtain and use to create nuclear devastation.

The Chipmunks were already set for a Holiday release, so another group of mighty mites fits the bill.

The Mission Impossible Force averages 5' 7" or 5' 8." When Cruise and Jeremy Renner, who portrays analyst William Brandt, walk beside each other they are a dynamic diminutive duo. They are joined by Paula Patton, as Jane Carter, and Simon (no, not that Simon) Pegg, playing Benji Dunn, the jittery gadgeteer. Pegg, at 5' 9," is the tallest by about an inch. They're a bunch of spunky shorties.

But have no fear, Ethan Hunt is towering. In one of the most memorable, outrageous sequences in recent memory. He has to climb a glass-walled building - the highest in the world (in Dubai) with a pair of magic gloves. He vaults, hangs, dangles, plummets, and slides. He's a human squeegee. How can you not love that?

The cast is attractive, except for the nasty villains. Tom Cruise has his usual flair, Renner is intense, Pegg is funny, and Potter is lovely.

Michael Nyqvist is the irredeemable villain. Having been replaced by Daniel Craig and Rooney Mara, both he and his recent costar Noomi Rapace, the memorable leads from last year's Swedish The Girl with the Dragon Tattoo have found roles in American films this season. [Rapace appears in a supporting role as a gypsy in Sherlock Holmes: A Game of Shadows.]

Director Brad Bird, who directed The Incredibles (2004) and Ratatouille (2007), brings his animated soul to Ghost Protocol. His imagery approaches that of an outrageous cartoon.

Bird has an early scene that shows his playful nature. It's a violent escape from a Russian prison to the soundtrack of Dean Martin crooning. That tells us we're among weird, mellifluous bedfellows.

The ending of Mission Impossible - Ghost Protocol is coy, but it leave its audience comfortable.

Chipmunks and Russians, keep your distance. IMAX is here.