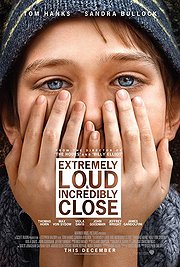 People Magazine picked Extremely Loud and Incredibly Close as, "The Best Film of the Year!" At least that's what the ads blare.

There are at least a dozen movies that could validly be picked as best of the year. Extremely Loud and Incredibly Close is not one of them.

But Extremely Loud may be a dream for publicists. It has two of the most popular movie stars as leads - Tom Hanks and Sandra Bullock. It casts an unknown nonactor (Thomas Horn) in the key role as an eleven-year old son.

And Horn is smarter than a fifth grader. Although he's not an "actor," he was a winner on Kids' Jeopardy! Oh, that's marketable.

The story is based on a novel - the depth is cut - by Jonathan Safran Foer. It comes from the tragedy of the destruction of the Twin Towers on 9/11.

Hollywood loves tragedy, especially if they can exploit it, by leaving out the humanity and substituting star power and shtik.

Extremely Loud and Incredibly Close is the kind of movie that may make a realist cringe. It's also a feel-good movie, which in avoiding reality, might appeal to a large audience. It has its moments, but like The Blind Side (2009), contrivance rules.

A movie like Extremely Loud and Incredibly Close is the kind of movie that uses sentimentality rather than true sentiment.

One character and actor puts the contrast into bold relief. Max von Sydow as the silent renter is credibly human, and seems to have walked in from another movie. His performance has a purity that the rest of the movie sorely lacks. When he's not present, the movie snaps back to superficiality.

Extremely Loud and Incredibly Close is the story of a boy (Horn) whose father (Hanks) dies in the World Center. The boy finds one of his father's keys - not to credibility. He sees the name Black with the key and so goes in search of Lewis Black. Oh, if only. Lewis Black would destroy this film. No, I'm afraid the boy goes on a wayward search after "meaning."

His mother (Bullock) does not seem to relate. Ah, don't jump to conclusions. Handkerchiefs may be obtained with your Mountain Dew in the lobby.

Earlier this year Hollywood tried to match big movie stars Hanks and Julia Roberts in Larry Crowne, but it sputtered. So now they've turned to Tom and Sandra. Is Tom and Meryl next?

Hanks is as good an actor as Hollywood has, but even he is dependent on his role. As Thomas Schellgame - I mean Thomas Schell - in Extremely Loud he has a difficult time finding much of a character, so he decides to shrug a lot. It's a gimmick.

Director Stephen Daltry beautifully directed the gifted Jamie Bell in Billy Elliot (2000), but Horn is more Tinker Bell than Jamie Bell. He doesn't have the talent. Horn's carrying a tambourine and a juice box simply doesn't do it.

It's surprising that the screenplay was done by Eric Roth, who with Michale Mann scripted The Insider (1999), which had great humanity and depth. Extremely Loud has neither. It has tear ducts where its brains should be.

Hollywood has an affinity for easy tragedy - it's in their DNA. But their DNA is Do Not Authenticate. They make historical cupcakes instead.

Making tragedy inauthentic and sentimental is a stale mix.