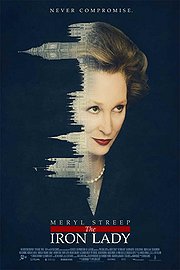 The Iron Lady is an example of an actress being so much better than the film she's in.

Meryl Streep, as Margaret Thatcher, presides with grand humanity, over a film that is pretty much a shambles.

Streep transcends a mediocre director and a hapless writer. Phyllida Lloyd, who directed her in Mamma Mia! (2008), hopscotches over politics. Streep's loyalty to Lloyd perhaps is admirable, but the director doesn't give her much help.

Margaret Thatcher was England's Prime Minister from 1979 to 1990.

Whatever one's politics -- conservative, liberal, or apolitical -- one doesn't want Thatcher's rise to be treated with such random superficiality. Streep humanizes the conservative icon, but the movie around her wobbles.

Abi Morgan's screenplay is conventional and sometimes trite. Morgan also wrote the negligible screenplay for this year's Shame. But the present film does not have the nudity that distracted viewers from her previous one-note writing.

Morgan's big, tedious gimmick is to employ a lot of hallucinations that Margaret has with her deceased husband Denis (Jim Broadbent), as she slips into dementia.

Of course, Broadbent, also a fine actor, brings his patented empathy to the tired role of Denis. He previously exhibited that sensibility in Iris (2001) and recently in Another Year (2010).

Morgan writes an exit line for Denis that is obvious and comes way too late. At the beginning, we know Margaret stands alone.

The Iron Lady has a little vivacity when the young Margaret (Alexandra Roach) and young Denis (Harry Lloyd) meet and relate, but as Denis gets older, Morgan turns him into a prop.

As events careen past her, Margaret is given two effective scenes. One is when the young Margaret stands up, although much of her rise is considered as a given.

The other, which is the film's best scene, is when Thatcher vehemently berates her cabinet. There's life and conflict in that speech.

But for too much of the film, Margaret Thatcher is portrayed as a bibulous hallucinator.

I was willing to drink a toast to her. But the glass was empty.