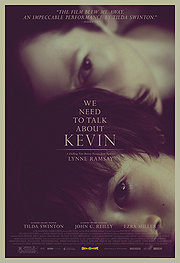 Watching the movie We Need to Talk About Kevin will make you feel like hell.

We Need to Talk About Kevin is a raw, gruelling, disturbing nightmare. I dare you to try to forget it.

If one goes to the movies to escape, this isn't for him or her. If one is willing to see how a director and her actors deal with a hideous experience, then it may be watchable.

The movie is a kind of torture -- for its protagonist Eva (Tilda Swinton). And the audience. For its first half, it certainly tries the audience's patience.

We Need to Talk About Kevin is a tale mostly told in fragmented flashbacks. We realize Eva's son Kevin (Ezra Miller) has been involved in something horrible. We see police, firemen, and parents in a frenzy outside a high school at night.

We don't know how or exactly what has happened, but we can guess.

In flashbacks we witness the son's development as an anti-social, conniving misfit, who goads, mocks, insults, and outmaneuvers his nerve-wracked mother.

She does not like her son; many of us in the audience hate him. He has no redeeming qualities. His blank, unflinching stare is in cruel control. His attitude is blandly vicious.

The book from which the movie is adapted is more ambivalent. Nature or nurture? The film doesn't offer much of a debate.

Through most of the film, director Lynne Ramsay relentlessly sloshes the color red all over the place. It becomes a visual cliche. It's blatant. It's as though she only has a red crayon in her crayon box.

Red is everywhere: a memory/dream of Spain's Tomato Festival is drowned in red. There's red paint thrown on a house and a car, red plastic seats in a Travel Bureau, a red button for an elevator, a blinking red light on a clock, a red baby scooter, in a market a wall of red cans of tomato soup (ah, Andy).

More and more red -- endless: a red ball, a red bowl, a red child's shirt, clowns in red in pictures on the wall, red blood on Eva's face as she looks in a mirror, a red jacket, red jelly oozing from a sandwich, red paint which Eva constantly is scrubbing off her porch and wall, red wine. It's a self-indulgent deluge of red.

Eva, please drink a glass of white wine. But, no, she drank red wine.

I was going down for the third time in red, when I left the movie early, and had a drink. Not Red Bull, blessed Grey Goose.

Despite being extremely annoyed, I steeled myself to watch the entire movie the next day. I was not a happy camper.

More red. Then Eva and Kevin play miniature golf. The ball was -- orange. I perked up, but then Ramsay tricked me. The flag on that final hole had an 18 -- in red.

Red, red, red. Just when I thought Ramsay had lost her way entirely down the red brick road and into the boy's blank, disturbing stare, she shows brilliant restraint. The endless parade of red doesn't prepare us for Ramsay's masterly handling of the scenes of violence.

I'm a sucker for Hitchcock, and last year Jeff Nichols showed he knew his Hitch in Take Shelter (2011). But perhaps Ramsay knows her Hitchcock even better.

We dread seeing a girl blinded, an animal killed, a massacre. But we see none of these. We expect Ramsay to be explicit, because her use of red was so relentlessly obvious and one-dimensional.

But she lets our imaginations assume, and sometimes we're wrong. Ramsay beautifully manipulates us so we miscalculate. This director, who seemed so heavy-handed, proves herself deft.

At the end, Ramsay shows us red, white, and blue, and American flags in a gymnasium and on a police car. The red symbolically now shares meaning with two other colors. It's America.

Since We Need to Talk About Kevin is such a visual experience, creative artisans are crucial. Director Ramsay is evocatively served by her gifted cinematographer Seamus McCarthy.

She uses three people, who worked on the movie Shame (2011), to help her create the look which is both "slick and ghastly" [author Lionel Shriver's phrase for a particular set]. They are production designer Judy Becker, art director Charles Kulsziski, and set director Heather Loeffler. We Need to Talk About Kevin is a leap up from the inferior Shame.

Ramsay is much better served by her screenplay, actors, and characters than Shame was. They are not minimalist. They evoke more. Their humanity and lack of humanity is not superficial as it is in Shame.

Lynne Ramsay did the screenplay with British actor Rory Kinnear, adapting a novel by Lionel Shriver.

Shriver is almost mythic -- in somewhat the sense of the late Stieg Larsson. Both writers have intriguing personas and backgrounds of artistic struggle.

Shriver is a tale in herself. She was born in North Carolina, and she decided to change her name from Margaret Ann to the perhaps misleading Lionel. She was educated at Barnard and Columbia. She is married to a jazz drummer. They have homes in London and Brooklyn.

The 54-year old Lionel has published seven novels. Only one has made money. The money-maker We Need to Talk About Kevin was rejected by 30 publishers, until it finally was accepted by a small publishing house.

Word of mouth made We Need to Talk About Kevin into a provocative hit, and it is published internationally in many countries, and has made millions.

Lionel, you're a hell of a train, rumbling across the world.

Shriver has an ironic sense of humor. On a leaf before the novel, she quotes the late wholesome columnist Erma Bombeck, "A child needs your love most when he deserves it least."

Ms. Shriver did not participate in the making of the film adaptation of her novel. Since the novel is epistolary -- in the form of letters from Eva to her husband Franklin -- it almost cries out for voice-over narration, but Ramsay and Kinnear fortunately didn't take that well-worn route. They made Shriver's words visual and kept their potency.

Tilda Swinton is harrowing as the mother. Why did the child Eva bore turn out to be a monster? Throughout his growth, she tries to fathom and cope. She's smart enough to recognize what Kevin is, but she's helpless to change it. Swinton powerfully captures her torment.

John C. Reilly is effective as the enabling father -- "he's a sweet little boy. That's what boys do." Franklin avoids reality until he can't anymore.

One hopes the talented Ezra Miller isn't type cast. He shouldn't be. He was in City Island (2009), and played the likeable Tucker Bryant in tv's Royal Pains. Like Charlize Theron, he should be able to leave the Monster behind.

It won't be easy for the rest of us.

Lynne Ramsay and Lionel Shriver have made sure of that.