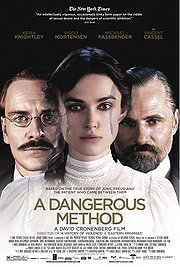 A Dangerous Method is a lustreless squabble.

Much of the essence of drama is conflict - often verbal. A Dangerous Method, based on actual figures was a book, then a play, and now it's a film, but somewhere in the long transformation, it became dulled.

A Dangerous Method is the story of Carl Jung (Michael Fassbender), and his relationships with a patient Sabina Spielrein (Keira Knightley) and with Sigmund Freud (Viggo Mortensen).

Under his care and tutelage Sabina becomes a psychoanalyst who influences Freud - "death instincts" and all that.

In actuality, letters were found written by Jung and Sabina that suggest that they had a physical relationship, so that is the grist for A Dangerous Method. I guess the method is, "what kind of spanking do you suggest?"

Director David Cronenberg is almost always compelling. Many of his movies have potent, startling shock. But A Dangerous Method doesn't shock; it nags.

At the end, before the credits, we read what eventually happened to the characters - those events are more interesting than anything we've seen in the film.

A Dangerous Method is perhaps Cronenberg's only film that doesn't have danger. A History of Violence (2005) lived up to its title, and Eastern Promises (2007) had gruelling impact.

Dead Ringers (1988) is a classic, and probably The Fly (1986) is also. Whatever one thinks about Cronenberg's past efforts, they're not boring. Even Spider (2002), which took us down the dim road of a mind, had its moments.

Maybe having done the fly and spider, now Cronenberg is only left with the web of method.

The book by John Kerr was transformed into a play by Christopher Hampton, who also did the screenplay. On stage it must have had more snap.

One problem is the casting. The movie opens with Sabina being taken by carriage to a mental hospital in Switzerland in 1904. Cronenberg starts with images of her twisted, distorted and screaming. From that height of anxiety, she has no place to go but down. It's as though Knightley studied acting under Jack Sparrow.

But, have no worries, by the end Cronenberg has her looking ready for a Dove commercial. Manic Sparrow becomes docile Dove.

Or an advertisement for the latest pharmaceutical product. No danger in the product; you just may die of boredom.

Is Michael Fassbender on a single-minded mission to try to make sex dull? In Shame, he wandered around with frontal nudity, and in A Dangerous Method, he says the word "penis" out loud. But Mike, it's 2012.

Fassbender is not phony or dislikable, he's just at a great disadvantage. In Shame he had his penis to distract; in A Dangerous Method he has to count on his flaccid face.

Knightley tries to help him by baring her nipples, but that's no shame.

Then there's Viggo - a stalwart actor of action, character, and violence. As Freud, Mortensen looks basically bemused, as though he knows he should be punching somebody out.

The most severe conclusion Freud comes to is when he says that he's going to cut the figurative thread that his relationship with Jung hangs by. That's not exactly emasculation.

It's as though a reel with all the impact got let out.

Cronenberg turns Carl Jung into Jung-lite, and he makes Freud look like a cigar store Indian, with an ever-present phallic symbol in his mouth.

In A Dangerous Method, Cronenberg wouldn't hurt a fly.