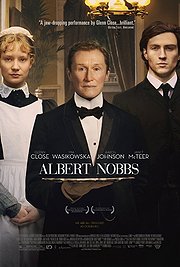 These were Michelle Williams in My Week with Marilyn, Kirsten Dunst in Melancholia, Rooney Mara in The Girl with the Dragon Tattoo, Tilda Swinton in We Need to Talk About Kevin, and Meryl Streep in The Iron Lady. They were all terrific, and arguably better than anything delivered by a male.

Williams, Mara, and Streep received Oscar nominations. They were joined by gifted actresses Viola Davis in Help and Glenn Close in Albert Nobbs, both of whom deserved their nominations.

Both Glenn Close and Janet McTeer give tour de force performances in Albert Nobbs. Their provocative roles - one of repression, one of flamboyance - cried out for attention.

As with Meryl Streep in The Iron Lady, their performances are better than the film around them. Albert Nobbs is more of a skit than a full-blown drama.

Albert Nobbs is a thin character study, but what a character! The title character has spent her life posing as a man to get a job and keep it. When the film opens in 19th century Ireland, she has spent her career as a butler in a Dublin hotel. No one knows her actual gender.

She has lived masquerading as a man. It has been a vulnerable existence - full of grief, fear, and delusion.

Albert has dreams of having a relationship with a young maid (Mia Wasikowska) and opening a tobacco shop, for which she has saved over the years. How feasible are her plans?

Glenn Close [ironically, this usually is a man's name] at times is somewhat limited by her role. How many varieties of stony expression can she achieve?

She has a few scenes in which she can show emotion - when she tells about her first job, her eyes shine with delight. But most of her performance is static. Albert is hard to root for - she's a stony mouse.

Albert looks like a morose Mrs. Doubtfire. The comparison is almost unavoidable. Close, in her makeup, has a strong similarity to Robin Williams. We wait for Albert to break out in some hilarity.

Janet McTeer, as Albert's bold friend, is able to make a lot out of the delicious contrast between her and the repressed, timid Nobbs. McTeer is reminiscent of Marlon Brando who dressed in female garb in The Missouri Breaks (1976). McTeer brings welcome energy to the film.

Close with John Banville and Gabriella Prekop wrote the screenplay from a story by George Moore (1852-1933). Director Rodrigo Garcia often has busy music behind the dialogue, as though he doesn't trust it.

Albert Nobbs is about miserable decency.

They join the parade of brilliant actresses who were the most memorable element of the movies of 2011.

In 2011 actresses transcended actors. The very best performances were female.

It wasn't even Close.