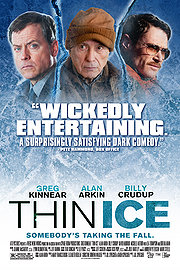 Thin Ice is in the tradition of movies that were filched from their directors, recut, changed, and then released in a different, more "commercial" version from what their creative directors intended.

Probably the most notorious case of a movie that was maimed by interlopers is The Magnificent Ambersons (1942), directed by the brilliant Orson Welles. After Welles left for Brazil, the studio truncated his film and shot another ending that was positive and destroyed Welles's vision.

Another director whose vision was changed is David Fincher, who directed Se7en (1995). His stark ending was softened by the studio who added a hokey "uplifting" narration at the end with Morgan Freeman mellifluously narrating, The March of the Hemingway. It corrupted Fincher's bleak vision.

Both The Magnificent Ambersons and Se7en were impressive movies that were lessened by studio interference. They survived, but in excised form.

Director Jill Sprecher joins the unhappy band of creators whose work was usurped by the uncreative.

With her sister Karen as co-writer, Jill Sprecher made a movie titled The Convincer. It was shown at the Sundance Film Festival to an enthusiastic reaction. It got a national distributor.

But the distributor and the production company -- the money guys and gals -- got busy. Sprecher's movie hit the fan and was cut to pieces.

Over Sprecher's protests, her film was cut, reedited, rescored, and retitled. And, of course, narration was added. Sprecher tried unsuccessfully to have her name removed from the final release, which is now titled Thin Ice. It's not the movie Jill Sprecher intended.

Sprecher's The Convincer was 114 minutes; the new version Thin Ice is an excised 93 minutes.

There is some irony in that -- like The Magnificent Ambersons and Se7en -- Thin Ice remains somewhat effective. But it's less than it should be -- and probably was.

Thin Ice is entertaining, but it has the whiff of interference. Thin Ice is choppy, its tone jumps, it has an unnecessary voice-over, and one wonders about the easy, sappy ending. A lot seems slightly out of kilter.

It's an obvious connection to relate the Sprecher sisters to the Coen Brothers. Thin Ice could be called Kenosha, instead of Fargo.

Both are set in a frigid environment, have sudden violence, quirky characters, outstanding actors, and a major character who grows increasingly desperate. But Greg Kinnear is not as amusingly brittle as William H. Macy is in Fargo (1996).

Thin Ice is a film of endless lies, desperation, deceit, and human fallibility. Mickey Prohaska (Kinnear) is a struggling insurance agent in Kenosha, Wisconsin. He lives on lies -- only once does he tell the truth to an uncontrollable accomplice (Billy Crudup).

Mickey hires a go-getter (David Harbour) to take advantage of the man's sales, but when the go-getter arranges an insurance policy for a forgetful old man (Alan Arkin) who lives in a old, rural house, Mickey gets involved.

Mickey discovers the old man unknowingly possesses a valuable, antique, Viennese violin, and he forms a plan. It evolves into violence and chaos.

One potential qualm in Thin Ice is that the characters are unlikable. Corruption and fallibility may get tiresome. Mickey lives on an assembly line of lies.

The cast is first-rate, no matter how much footage of them is on the cutting room floor. Kinnear has perfected glibness, but it is fairly one-note. Arkin is credible as the befuddled old man who owns the house and the precious violin.

Billy Crudup (as a security system installer whack-job) steals -- or at least smashes -- the scenes he's in as he explodes into rages.

The Sprecher sisters created a lively plot for their gifted cast. Then along came the interlopers.

The distributors are ATO Pictures, and they say the ATO stands for Art Takes Over. Maybe they should think about changing it to Amateurs Take Over.

One wonders what the original movie was like before it fell through the thin ice of manipulation.