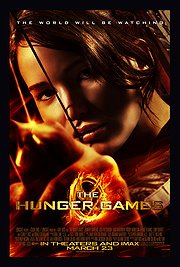 The Hunger Games is nourishing entertainment. It's a riveting adaptation of the first of Suzanne Collins' trio of celebrated novels.

The plot of Collins' brilliant novel is perverse and direly fatalistic, but it has a forceful, enthralling humanity.

The movie lessens some of the novel's more chilling moments, but captures much of the book's spirit and appeal.

The fact that Gary Ross, who did the wholesome Pleasantville (1998) and the wholesome Seabiscuit (2003), was chosen to direct The Hunger Games, showed that they were going to shoot for smart commerciality that did not push the enveloping perversity and vivid violence.

Ross creates a violence that, if not wholesome, avoids being as graphic as the novel. It's still effective.

The Hunger Games is set in a future country in which each year two young people are chosen by lottery from 12 districts and pitted against each other for the entertainment of - and control over - a vast television audience.

Only one of the 24 participants survives - the rest die, often in vicious conflict. It's brutal reality tv.

The Games are run by the Capitol, which commands the districts, who have various levels of wealth or starvation, poverty, and grief. Each district has a different identity. It's a survival-of-the-fittest world, with the Capitol and President Snow (Donald Sutherland) in total control.

The Hunger Games centers on two young people from District 12, which is a poor coal mining territory. 16-year old Katniss Everdeen (Jennifer Lawrence) and Peeta Mellark (Josh Hutcherson) are sent to the Games. Katniss has volunteered to replace her younger sister, whose name initially was picked.

The pair from District 12 have to face better-trained participants plus the deadly elements. And each other.

Katniss and Peeta are mentored by the dissolute Haymitch (Woody Harrelson), who is the only person from District 12 who ever won. But he seems to have lost all his faculties to alcohol and dissipation. The Games are a cruel ordeal. Survival seems hopeless.

Fortunately Jennifer Lawrence is photogenic, because close-ups of her face dominate the film. Her eyes, mouth, and nose are like characters. They glare, frown, and flare. The close-ups keep the humanity in focus.

Ross chooses movement over extreme graphic violence. When the beasts - the "muttations" - attack, it is blurry pell-mell.

Most of the acting is convincing. Peeta has palpable chemistry with Katniss, due to the ability of Hutcherson and Lawrence. Woody Harrelson, as in the recent Game Change, is at the top of his game as the jaded and dissolute Haymitch, who still has a shred of canniness left.

Less effective are Elizabeth Banks as Effie Trinket and Toby Jones as Claudius Templesmith, who are superficial.

Ross and fellow screenwriters Billy Ray and novelist Collins have made a few changes. In the movie, the narration is dropped. The novel is told in the first person by Katniss. Fortunately Lawrence is a gifted actress who can suggest many of her the thoughts. Explication is not needed.

The film dilutes the irony and the symbolism, e.g., the dandelion. There's a lot more blood in the book, more torture, more thirst, and yuck, more kissing. But don't worry, Bambi is not killed in the movie as in the book.

The movie also drops the sources of the "muttations," which may have been over-the-top even in Collins' book.

In the last year at least three of the most gripping and psychologically provocative films have been adapted from remarkable novels.

The Girl with the Dragon Tattoo and We Need to Talk About Kevin were adapted into first-rate films. Now The Hunger Games joins them.

All three brought piquant language, creativity and vitality to the screen. May the cineastes keep reading.

The Hunger Games is much more than a game. It is a memorable human experience.

Thank the gods for the wonder of literature and the vision of movies.

Some of us still hunger for eloquence on the screen.