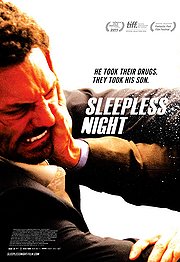 Sleepless Night (Nuit blanche) is one frenetic French dream. It's slam-bang mayhem - with an active intelligence.

Smartly directed and stylishly composed by Frederic Jardin, it is both claustrophobic and in nearly-constant motion.

Sleepless Night begins with a sequence at tepid dawn on a deserted French street, as two cops rob two drug carriers in a vehicle. One of the cops is stabbed, and one of the drug carriers is shot to death.

The scene is somewhat washed out by the early light. But what is to follow in the rest of the movie is a brilliant use of light and darkness, motion and suspense.

Vincent (Tomer Sisley) - the cop with the wound in his side - goes home, where his young son Thomas (Samy Seghir) is staying overnight. His mother has remarried, and the relationship between Vincent and Thomas is not close.

Thomas is basically flippant, because his dad doesn't really know him. Vincent drives Thomas to school and drops him off.

But Vincent has been identified by the gangsters as one of the cops who stole the stash, and the big boss Marciano (Serge Riaboukine) demands its return.

Marciano has Thomas kidnapped and he's being held somewhere in Marciano's massive, maze-like night club as inducement for Vincent to return the drugs.

As evening turns into night, the club is teeming with hordes of people pressing against each other, drinking, dancing and cavorting in mass celebration.

Vincent tries to return the cocaine, but things go awry. It turns into a dangerous game of fateful hide and seek. How will Vincent rescue his son in the massive club with the massive mob of partiers?

It's a game of mistrust and deceit. Good moves are followed by bad ones. Fate is not easy. Screw-ups are easy.

The name of the night club in which most of the action occurs is Le Tarmac. It should be Acme, because Vincent is part Wile E. Coyote and part Road Runner. Destruction prevails.

One has to suspend his disbelief, especially in an incredible fight in the vast kitchen, with the large staff watching raptly. Almost every object in the kitchen is sent into chaotic, destructive flight.

Director Jardin is especially fortunate to have Tom Stern as cinematographer. Stern recently shot The Hunger Games. He has been cinematographer for Clint Eastwood for ten movies, starting with Blood Work (2002) through J. Edgar (2011). Before that he was gaffer and then chief lighting tech for Clint.

Stern spent part of his youth in France, and as an adult has a house in France and married a French-woman. In 2009 Stern won the French Cesar Award for Best Cinematography for Paris 36 (2008). So the proximity was a positive.

Jardin has Stern do things that Clint never did. Stern's camera movement, vertical shots, and lighting effects are spirited and fresh. He's a cinematic whirling dervish.

Sleepless Night has several memorable shots, e.g. a track of the crawlspace above the ceilings from one bathroom to another. It has a purpose. Or the dark club lit only by a myriad sprinkling of cell phones.

Also crucial to the effectiveness of Sleepless Night are production designer Hubert Pouille and set director Floria Dima, who must have been exhausted replacing the flying objects. Lamps, tables, chairs, trays, glasses, dishes, colanders, and bottles are obliterated.

The music (Nicholas Errera) adds a throbbing pulse to the movie, highlighted by Queen's "Another One Bites the Dust" as accompaniment to a wild chase through the club.

The screenplay by Jardin and Saada adds a depth with its dualities. They abound with deft meaning: two pairs of cops - one corrupt in each duo; cocaine and flour; two bathrooms' hiding places; two husbands; two cell phones in a climactic car ride; two drivers, and on and on. It's a bounty of intriguing dualities.

Sleepless Night is a French film, so it contrasts with an American action movie. The protagonist on the run hides his face by kissing an attractive woman - more than once. Ah, those French. And Sleepless Night ends in a way an American movie never would. [Is the final shot reminiscent of Truffaut's The 400 Blows (1959)?] Ah, French ambivalence.

But whatever its nationality, Sleepless Night is intense. It's 103 minutes of brawling, energetic entertainment.