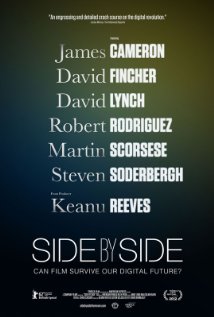 In Side by Side, editor Walter Murch states, "In a way, film was the church of the 20th century."

But the church of film is shutting its doors. Stained glass is being replaced by digital imagery. A new religion is on its relentless way.

Director George Lucas says, "The first real image we did that was digital" was in Young Sherlock Holmes (1985). In that image a knight in armor crashes through a stained glass window. "It took six months to do seven shots." It shattered more than glass.

Keanu Reeves, who produced and narrates Side by Side, says the film "is about the science, art, and impact of digital cinema." Christopher Kenneally deftly directed and wrote the documentary.

Reeves asks director David Lynch, "Are you through with film?" Lynch replies, "I think I am."

Director Martin Scorsese says, "It's exciting because it's a reinvention of a new [sic] medium."

The revolution is on.

Murch says, "Digital is this unbelievably malleable plastic of imagery and sound."

Director Stephen Soderbergh says, "It's either a scary thing or a liberating thing."

Director Danny Boyle, always energetic, says that in 28 Days Later (2002) he used ten digital cameras instead of one usual camera. It was cheaper and allowed him more freedom, and of course many more shots and angles to chose from. With the smaller equipment, "You could shoot illegally and surreptitiously," says Boyle.

"We would not have been able to achieve the film on film." He needed the digital process.

"It was the first real acknowledgement on a large scale of digital." says Boyle.

The history of digital is fascinating.

Jim Kroll - VFX Supervisor - says, "The exciting thing about it is it didn't seem like there were a lot of rules. It really did seem like kind of the wild west."

Tim Webber - VFX Supervisor - says, "The massive advantage to digitizing your film was that you wouldn't get any degradation." The digital footage would last - at least for a while.

But not all directors and cinematographers are fans of digital process. Director Christopher Nolan and his cinematographer Wally Pfister are wary about the quality. They resist the digital tiger at the gates.

Pfister says, "I'm not going to trade my oil paints for a set of crayons."

Producer Lorenzo Di Bonaventura questions the effects of the digital process, "You manipulate it to death. We may have lost something."

There are two potential pitfalls for the digital process. One is that it allows everybody to be a filmmaker. Standards and quality could suffer. Tattoos today are commonplace and often trite; they've lost their individuality and value. Digital films are threatened by mediocrity replacing creativity.

David Lynch is leery. "Everybody and his brother has a piece of paper and a pencil. How many great stories have been written on that piece of paper?" he asks. "Now the same thing is going to happen in cinema."

One denier says, "There isn't a tastemaker."

In response, Reeves who is an engaging interviewer, exclaims, "Wow!"

Director/writer Lena Dunham says, "Without digital I don't think I ever would have been making movies."But her saving grace is that she says, "I'll always come at it as a writer."

The other problem is that digital film doesn't last. If we store the digital films, they become quickly faulty and if we reuse them, they wear out.

Storage is a problem with which the industry will have to come to terms.

Whether cinema is a church or a factory, the dream still lives and is vibrant.

You can count on that on your pixels.