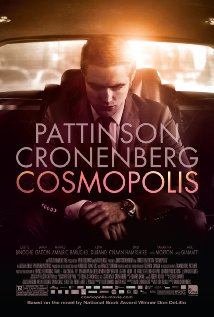 It's rare to have a good movie made from a novel by an artistic American author. Extremely rare.

Most artistic American fiction isn't made into movies. Language doesn't seem to translate into image. Plot and character must be twisted to be more commercial.

Cosmopolis is the story of Eric Packer (Robert Pattinson), a financial wizard, who takes an immense, white stretch limousine across Manhattan with the goal of getting a haircut from a family acquaintance in Hell's Kitchen.

While on his trek he is investing all his money, leveraging the Chinese Yuan (in the book it is the Japanese yen, but what's the difference? They all look alike.) He's risking it all.

In his limo Eric is visited by several employees. His trip is slowed and stalled by the visiting president's motorcade and the funeral procession for a rapper.

A few times he exits the car to meet his wife Elise (Sarah Gadon) or commit unexpected actions.

But unlike the book, he never opens the sunroof. Cronenberg's film is basically enclosed.

One of the film's major flaws is the casting of Robert Pattinson as Eric. One can imagine that the film would never have gotten made without the popular young heartthrob, but he is miscast.

Pattinson can be a capable actor, but he doesn't have the gravitas to play Eric Packer. He mopes and just languidly goes through the motions.

DeLillo's Eric is not shallow on the page, but in the movie he is a near-cipher. The closest Pattinson comes to the page is the several times he nearly turns into cardboard.

Much of the film takes place in a stretch limo. It stretches more than the actor does. Pattinson is no young Jeremy Irons.

In the book Eric is knowledgeable - he knows the Latin name of the honey locust tree. He makes references to Freud and Einstein. He seems intelligent and aware. He has depth.

Cronenberg's Eric is venal and static. This is lowlighted by the limitations of the actor.

Cronenberg must figure that since Pattinson's Eric is a near-cipher, he must pair him with an actress who is a near-cipher. Sarah Gadon fits the void as Eric's wealthy wife Elise.

There are two other actors who do retain personality in the vacuum. Juliette Binoche is feisty and fine as Eric's art dealer, and Kevin Durand is human and convincing as Eric's head of security. He has a strong presence.

At times it seems as though some of the dialogue is dubbed by Christopher Walken. Both Durand and Pattinson speak lines that have a rasp similar to Walken, but an occasional rasp is just a blip.

It is disheartening to see how many reviewers analyze Cosmopolis without any reference to DeLillo. The screenplay was written by director Cronenberg, based on the novel published in 2003.

DeLillo is a master of language - his prose sings. He is an eloquent stylist, insightful and incisive. Cronenberg's translation seems clunky. The dialogue in the film often is presented in a stilted and pretentious way. DeLillo's vision is blunted.

The challenge is to attain a visual equivalent for words. How do you visualize DeLillo's words describing the tall building in which Eric lives?

DeLillo writes, "It had the kind of banality that reveals itself as being truly brutal." How do you show that? Cronenberg doesn't even try.

Or how do you show, "A man from the century past played a saxophone on the corner"? You don't.

Some changes lose their point. DeLillo's Eric says in the car, "Nothing swivels but the spycam." Cronenberg changes it to the meaningless, "... but your seat." A seat replaces a spycam.

Cronenberg cuts one of the crucial major scenes, which is the last time Eric sees Elise amidst 300 naked bodies lying on the street at night. They're in a film being shot on the street. It probably was too costly for Cronenberg to shoot. It's a costly loss.

And Cronenberg ends the movie 5 1/2 pages before DeLillo's ending. It would be nearly impossible to film the philosophical observations in the final pages. Who needs them?

One personal caveat: I'm a fan of Don DeLillo. DeLillo once commented positively that a story I had written was "operatic."

Can you imagine that two novels in one of my courses were Norman Mailer's Harlot's Ghost (1,168 pages) and DeLillo's masterpiece Underworld (827 pages)? No one survived.

Cronenberg does make a few canny decisions with cinematic effects. Since a major theme in the book Cosmopolis is balance and "the importance of the lopsided," the director utilizes half faces. He has an abundance of profile shots, and often one side of the face is in shadow or marked by the remnants of pie filling (which is thrown at Eric) or a scar. Witness the right side of Eric's head after his haircut.

Cronenberg also uses light and the shock of its glare. "Let them see each other clean, in killing light," DeLillo wrote.

But profiles and light aren't enough.

There's an energy and personality missing from the film. The novel seems very intelligent; the movie doesn't.

In Cosmopolis, he throws DeLillo under the limo.