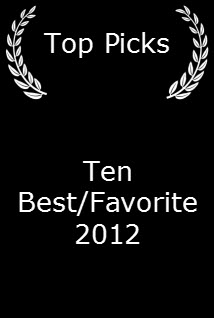 We now live in the "Unbelievable Generation."

In 2012 the word "unbelievable" took over the language. Now when something happens that actually evokes disbelief, we have no language left.

In 2012 it seemed every sportcaster's favorite word was "unbelievable." No. I saw it happen. It was believable. I saw it.

Reality TV has moved culture further into the realm of the "unbelievable." But films pull us back from that abyss. Documentaries give us glimpses of actual reality.

2012 is a year in which documentaries thrived. It's the first time I've ever included multiple documentaries on my list, and I could have chosen more.

[Among other worthy documentaries are: Booker's Place: a Mississippi Story, Jiro Dreams of Sushi, Searching for Sugar Man, Samsara.]

This was the most impressive experience I had at the movies this year. I saw this in IMAX, with its brilliant expanses of 70mm footage, and it overwhelmed the screen and immersed the audience.

Director Chris Nolan is the Caped Crusader of Cinema. He's fighting the good fight trying to defend celluloid against the onslaught of digitalization as it heads to its eventual domination.

Despite the emphasis on technology, The Dark Knight Rises keeps Batman (Christian Bale) human. Humanity prevails in this blockbuster.

Youth also was served. Anne Hathaway was compelling as Catwoman, and Joseph Gordon-Levitt joined the cast as a young cop. The old pros Morgan Freeman, Michael Caine, and Gary Oldman still have it.

Director Ang Lee created an evocative spell - part dream, part nightmare. The film depended on its surprise climax, but it transcended it to leave us with a vibrant, lasting experience.

In its last 45 minutes, this film became memorable in its representation of the furious assault on a compound in Pakistan in which bin Laden was hiding. Shot through a green murk and flashes of light, it brought suspenseful reality to the screen.

Zero Dark Thirty is the story of a CIA analyst (Jessica Chastain), but it is director Kathryn Bigelow's film. She's its heart and soul.

Featuring a superb performance by Tony Hopkins as Hitch - one that has been largely ignored - this brings the master back to human dimension.

Hitch has been under gossipy attack these days, and it's important to have his artistry recognized again.

The personal aspects in the film of Sir Alfred's life may not be very edifying, but Helen Mirren brings a grace to Alma Reville, Hitch's wife.

In this year when Sight & Sound's poll of critics and directors chose his Vertigo as best film of all-time, Hitch deserves remembrance.

This indie shouldn't work, but it does.

The plot is corny, but writer Zoe Kazan and directors Jonathan Dayton and Valerie Faris make it into corn souffle.

Kazan wrote the screenplay for herself and her boyfriend Paul Dano, and it has a personal flair.

Chris Messina helps ground the whimsy and make it credible.

This documentary, directed by Christopher Kenneally, is entertaining and revelatory. Keanu Reeves, who produced and narrates, is convincing as he asks various important film figures about film and digital. The history of digital is fascinating, and Reeves captures the conflict.

Established feature film director Jonathan Demme (The Silence of the Lambs, 1991) does his fourth film - one short and three documentaries - with singer/songwriter Neil Young. Demme accompanies Young on his return to Toronto and a theater in which he had performed 37 years before. He performs two new concerts there. They also travel to the Omemee environs of Young's youth.

Demme uses new, creative stylistic effects. One happy accident occurs when a camera on a microphone slips and it photographs Young in an unexpected, intimate way.

The songs - both new and old - are stirring. Young sings his rarely performed "Ohio" about the Kent State victims.

The old troubadour is still potent.

Another marvelous documentary by an established feature film director about a legendary singer. Kevin Macdonald (The Last King of Scotland, 2006) creates a bittersweet portrait of the iconic reggae singer.

Myth can be fascinatingly human.

This film opened in France in 2011, but it didn't come to America until this year. It played at the Tribeca Festival.

Sleepless Night is relentless action and dazzle. It is outrageous but not ridiculous, as many action movies are these days.

It's the intense story of a father and son caught in an immense nightclub, trying to elude gangsters and dirty cops who are trying to kill them

This is a warm look at the present through eyes of the past.

They portray a group of retired opera singers at a retirement home in England, who plan a gala performance to celebrate Verdi's birthday.

The coda at the end of photos of the actors and singers in the past and the present is priceless.

There's a photo of Tom Courtenay from his past days when he was star of The Loneliness of the Long Distance Runner (1962). I think I gasped audibly.

I know Quartet made me smile ruefully.

Believable films do that.

Director/writer Quentin Tarantino is at the top of his sly game. He's aided by a gifted cast led by Christoph Waltz, who gives impressive conviction to the flamboyant film. Bold and slick.