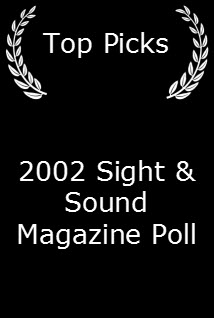 Every 10 years, British film magazine Sight & Sound conducts a poll of film scholars and critics the world over to determine the 10 best films ever made. Tony Macklin has been contributing since 1972, and his list has undergone only minor changes in the past 30 years. Here, he talks about each of his choices from the most recent poll, in 2002, as well as one surprising film that ended up on his ballot for the AFI's list of the best film comedies.

When I voted in the AFI for the best actors, I think my best actor was Charlie Chaplin, just because of what he did. I think that Charlie Chaplin is a one of a kind. He was the one who carried the banner for great, wonderful, remarkable silent film comedy.

I prefer Buster Keaton to Chaplin. Chaplin is sentimental. He has moments of sentimentality that make me wince. I'm more a Keaton guy, even though Chaplin may have been a more important figure in the history of film.

I grew up with the western. The western was the genre. It wasn't light sabers; it was six-guns. I think my next list, if I'm still alive, I might have just one western. And would it be The Searchers or would it be Sergio Leone's (Once Upon a Time in the West)? I think Sergio Leone's film is a work of art much more than The Searchers. But The Searchers brings John Ford, John Wayne and the whole Monument Valley, the whole thing. It's kind of a culmination of so many qualities and so much history and so much of the aura of American film.

I think it's a very human film. And at the end he has the pure image of this young girl, and he's a desiccated man who has nothing left, no values left. I think that that film probably speaks to what we loved in the '70s about film. Film was about character and personality and society and social values. Some of the scenes are still vital, they're still vivid in my mind. I guess I really have a soft spot or a fondness for people and films that are denigrated by society or the system or whatever. Priests were attacking this film from the pulpit when it is an extremely moral film. It shows the sweet life—yes, degradation, but it shows the cost of it.

When I was alone at a certain age, Vertigo was my favorite. Students didn't much relate to it, but God, did I. The sense of irony and the sense of fate, the sense of doom and loss and alienation.

To me, it's contributed so much. And I love the fact that Kubrick says machines are smarter than men, than human beings. Human beings are vacuous, banal. They're empty. And I like that. I agree with that point of view.

His best film. A film about women. I love women, or at least some women. It's another classic that has those sequences that are eternal. The hills, the riding on the bicycle, that wonderful actress—whoever she was.

It's a film that I don't think people realize how much depth it has.

That probably, other than a few slapstick moments, couldn't stand up to real rigorous criticism. It was just fun. I love that film. I really enjoyed it.