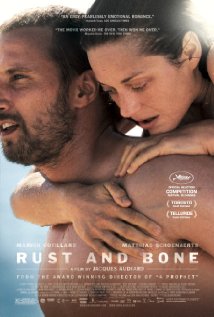 What makes us identify with characters in a movie? Do they have to be likeable? Or are they flawed beings caught in a human condition which in some way we share?

How much does plot matter?

The French-Belgian film Rust and Bone may raise these questions.

When one describes the plot of Rust and Bone, it sounds that it probably is thankless.

Stephanie (Marion Cotillard), a trainer of killer whales at a Marineland in France, loses her legs in an accident. She then has an erratic relationship with Ali (Matthias Schoenaerts), an uncommitted, self-absorbed wanderer, who is the father of Sam (Armand Verdure), a five-year old boy.

Ali treats the boy with a lack of attention. He is not intentionally unkind to others, but his relationships are rough and arbitrary.

This is hardly the stuff of compelling cinema.

Unless, of course, the director is an artist.

Jacques Audiard, who directed the exemplary A Prophet (2009), is creative and individualistic, and has a gift for the arrestingly visual.

Audiard takes what might be drab or tritely uplifting, and makes it a unique vision of human behavior under duress. Director Audiard, who co-wrote the screenplay with Thomas Bidegain from a collection of stories by Craig Davidson, has brilliant senses.

Rust and Bone is a film of motion: running feet, artificial legs walking, a speeding vehicle's tires in the wet night, hair blowing in the breeze, a spinning wheelchair, arms thrown into the air as music pulsates.

It's a symphony of motion.

Audiard has a marvelous shot of Stephanie standing with her arms upraised before the glass front of a huge water tank behind which looms a great fish with outstretched fins. It's the image of a poet. Such is the vision of Audiard.

Alexandre Desplat adds to the sensual experience with an affecting musical score that propels emotion.

Audiard uses surprises. At times the characters act unpredictably. Stephanie doesn't undergo the 12 steps of cliche that one might expect in an American movie. She resists, but she also is quick to adapt.

Ali is callous and decidedly not empathetic, but not evil or dumb as he might be in an American movie.

There are moments of unexpected joy as the characters undergo harsh experiences.

Marion Cotillard gives one of the most deft, natural performances of the year as the severely physically-damaged and psychologically-wounded Stephanie.

Matthias Schoenaerts is convincing as Ali, who has moments of gentleness shunted aside by self-absorption. Ali is both immediate and distant.

A lesser director would not have breathed life into Rust and Bone, but Audiard directs with skill and sensitivity, even when his characters lack those attributes.

Rust and Bone is cinematic R & B.

It is memorable rhythm and blues.