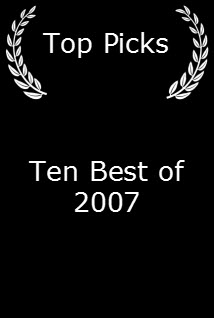 I can’t remember ever being as stymied in selecting a top-10 list of movies as I have been in 2007.

It’s not that it was a bad year; it was a good year – a very good year. The difficulty for me is picking from a contenders’ list that reaches more than 20. I’m confident in the top four, and I know that another — Ratatouille — belongs somewhere in the top ten, but that leaves five spots for a plethora of others. It’s a grab bag, and it’s constantly changing.

1. No Country for Old Men

This is my strong choice as Best Picture of the Year. It is the kind of movie that excites one’s senses about what film can do. Written, directed, and edited (under pseudonyms) by the Coen Brothers, No Country for Old Men shows Joel and Ethan Coen at the top of their game. In this venture, the Coens manipulate their audience as well as anyone since Alfred Hitchcock. People looking for complete resolution may find this film problematic. 2007 was the year in which several of the best movies did not reach an ending that tied up everything. Zodiac was another movie that left its bow untied at its conclusion. The Coens leave us unsettled at the end, but their film should reverberate in the mind long after one has seen it. The Coens render events — especially violence and death — in ways we don’t expect; they leave us suspended. Adapted from the potent novel by Cormac McCarthy, No Country for Old Men is about a hunter who finds money from a drug deal gone bad, and this sets in motion a relentless villain (Javier Bardem), intrigue, and conflict. The photography by Roger Deakins makes the Texas setting an evocative character. Violent and thought-provoking, No Country for Old Men casts a powerful, lasting spell.

This is a movie that occasions debate. People love it or hate it. Based on an actual experience, Into the Wild is the poetic tale of Chris McCandless (Emile Hirsch), who left Atlanta and civilization and headed for Alaska. If No Country for Old Men owes much to Hitch, Into the Wild is like Frank Capra with a negative ending. It spoke to the vestigial wanderlust left in me. Emile Hirsch does yeoman work as Chris McCandless. Director Sean Penn gets memorable performances from an outstanding cast. Catherine Keener excels. Vince Vaughan finally has a role that gets him out of the frat house. Hal Holbrook is wonderful as a crusty old veteran. Into the Wild validly can be accused of being sentimental, but it also has true sentiment.

The best action movie of the year. Despite frenetic action — directed by Paul Greengrass — it allows for important character development. Joan Allen and Julia Stiles are back, and David Strathairn is a new villain. Jason Bourne rocks, and so does Matt Damon. The film is full of dazzling effects.

Director David Fincher is a meticulous master. He focuses on the infamous serial killer in San Francisco in the late 1960s and 1970s. Jake Gyllenhaal, Mark Ruffalo, Robert Downey, Jr., et al, portray characters who are obsessed with the elusive murderer. Fincher is dedicated to the details and psychological effects of the baffling murders. There’s no conventional payoff, but the movie has resounding verisimilitude. Unfortunately, since it was released at the beginning of the year, Zodiac may be swamped by the recent deluge of holiday openings contending for awards.

Brad Bird’s delightful animated movie about a rat who partners with a young would-be chef to become the rage of Paris. This savory treat might whet one’s appetite and send him or her to pull out old favorite recipes. It’s that inspiring.

This is another movie that has caused a definite split among viewers, but it may well be the feel-good movie of the year. One is leery of it, since it begins coyly, but it surprisingly develops into an engaging human drama. The screenplay by Diablo Cody is sprighty, despite its cutesy moments. Ellen Page is a dynamo as the spirited  teenager who gets pregnant and decides to give up her baby for adoption when it is born. If your mom can deal with the topic of teen pregnancy, I recommend you take her to see it. She should enjoy it. Dad might even be entertained. Juno is a fresh, smart movie.

A remake of the 1957 movie, this remake by director James Mangold reenergizes the western genre. Russell Crowe, as always, is interesting, as the captured outlaw, and Christian Bale holds his own as the captor.

Just out on DVD, this David Cronenberg movie has a provocative fight in a bathhouse that takes one’s breath away. In a year of new takes on violence, this is an unforgettable one. Viggo Mortensen and Naomi Watts are effective in this tale of crime, dishonor, and intrigue.

Joseph Gordon-Levitt may be the best young actor around. In this movie written and directed (his directorial debut) by Scott Frank, Gordon-Levitt plays Chris Pratt, who is mentally damaged in a car accident. He is a janitor at a bank and becomes involved in a robbery. Jeff Daniels gave one of the best supporting performances of the year as a blind, witty mentor.

10. I’ll abstain from my tenth pick. Take your pick from among the following: The Assassination of Jesse James by the Coward Robert Ford, La Vie en Rose, I’m Not There, Gone Baby Gone, In the Valley of Elah, and The Hoax.

See, it was a very good year.