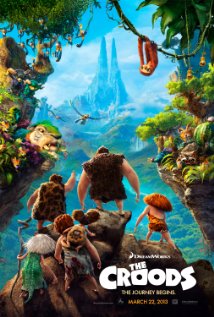 DreamWorks' The Croods is like an animated Reality TV show about a dysfunctional cave family. It's cartoon mayhem.

It's Croods in Stone - the Stoned Kardashians. It's Honey Crood Crood. It's prehistoric Snooki. It's constant noise and motion.

No wonder it's doing so well at the box office.

The Croods is the hectic story of an ancient family that has survived - unlike other families - by being wary and staying in their cave as monsters prowl at night. They constantly bicker.

The cautious father Grug (voiced by Nicolas Cage) never has had an idea - see Reality TV.

But Grug has an indomitable will. His young daughter Eep (voiced by Emma Stone) is equally willful. She's curious and in constant conflict with her dad.

He says, "Anything fun is bad" and "darkness brings death." He also speaks the creed of Reality TV - "big words anger me."

But his intrepid female offspring wants to follow the light. When a young man named Guy (voiced by Ryan Reynolds) comes into her life, he provides her with extra power and possibility.

As in Reality TV, in The Croods chaos rules. Whenever things start to slow down even a little bit, there are eruptions, downfalls, and devastation. Furor is everywhere.

What saves The Croods from sinking into the morass of self-absorption are the script and the visuals.

Fortunately, improvisation is not the essence of The Croods. The screenplay by Kirk De Micco ad Chris Sanders (they also co-directed) has spirit and heart. And it has some wit, particularly in Grug's amusing reactions to his cantankerous mother-in-law (voiced by Cloris Leachman).

Yong Duk Jhun is credited with the vivid cinematography. But as in the wonderful How to Train Your Dragon (2010) Roger Deakins is credited as "visual consultant." His magical touch is apparent.

That Deakins has never won an Oscar is a continuing absurdity. When you see his name in the credits, you know you'll see some special imagery.

The Croods is raucous and rambunctious.

It is set in a colorfully grotesque world.

Despite Grug's fears, it's a fun place to be.