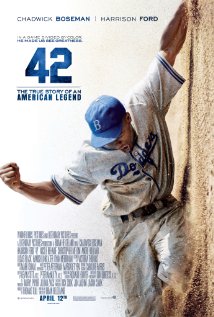 There are no violins in baseball.

At least that's what I thought.

In the movie 42, there are more violins than baseball bats. I never realized Jackie Robinson played baseball in the middle of an orchestra.

In scene after scene, the music swells above and beyond the dialogue and the action. It's a constant musical chaw.

Authenticity is anathema to most sports movies.

The movie The Mighty Macs (2009) had an African-American girl on the starting five. In actuality, there wasn't one on the entire team.

The movie Invincible (2006) had Vince Papale score a long TD. In actuality, Papale never ever scored any TD when he was on the Philadelphia Eagles.

There should be a Lifetime Sports channel. 42 would be a good movie for it.

42 is an entertaining film that flirts with authenticity - it is "based" on a true story. But it says it is "dramatized," which means it's as soft as saddle soap on a baseball glove.

42 is the story of the legendary Jackie Robinson who broke the color barrier in Major League baseball with his debut for the Brooklyn Dodgers on April 15, 1947. The movie follows his journey from 1945 through the 1947 season.

In 42 there are sequences of racism which are disturbing. But much of the film's racism lacks its viciousness. We don't want viciousness in a feel-good movie.

Because the movie is "dramatized," some of the scenes are contrived. In actuality, the Phillies' manager Ben Chapman delivered his bilious racial invective from the dugout. The movie has him standing posturing in front of the dugout.

There are odd softenings in 42. The movie has the Dodgers in spring training in Panama. Actually they trained in Havana. But we don't want to mention Cuba. Maybe that's why Cuba Gooding never played Jackie.

Spike Lee tried to make a film about Jackie Robinson with Denzel Washington. That would have had edge that's absent in 42. He would not have been hesitant to mention Cuba. Lee's project never was fulfilled.

The cast of 42 is serviceable.

I half-expected Sandra Bullock to play Branch Rickey. But Harrison Ford, as Dodger president and general manager Branch Rickey, steals the movie from the fabled base stealer. Both Ralph Branca - the last surviving member of the 1947 team - and former Dodger pitcher Don Newcombe both say that Ford looks almost exactly as Rickey did.

Like Christoph Waltz in Django Unchained (2012), Harrison Ford brings needed humanity to his movie. Although performing broadly, Ford adds zest and an earthy gravitas to his role.

Chadwick Boseman makes an engaging Jackie Robinson. His Robinson is not a cipher, but he's not a developed character either. He's likable but forgettable.

Nicole Beharie is pleasant as the spirited Rachel Robinson.

Hamish Linklater plays Ralph Branca, who in the movie gets Jackie to shower with white teammates. Sorry, Ralph, I doubt that will get folks to forget the homer you gave up to Bobby Thomson.

Director/writer Brian Helgeland creates a movie that has some strong emotional scenes. But his beginning and ending are conventional - almost insipid. And his use of music is like using a pinch runner for a major star.

At the end of 42, there is a jolt in seeing photographs of the actual Jackie Robinson. He is not forgettable.

Maybe an actual photograph is worth a thousand feel-good movies.