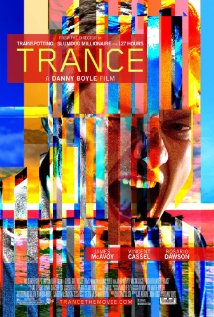 Trance is an elaborate tease.

It's like playing strip poker with a deck of all wild cards.

When director Danny Boyle has some discipline, he creates strong credible films such as 127 Hours (2010). When he loses control, he's a pretentious gadabout who creates preposterous nonsense such as Trance.

Trance is more mindless than mind-bending. It's the convoluted, stumbling story of art auctioneer Simon (James McAvoy) who suffers severe loss of memory when he's attacked during the robbery of Goya's "Witches in the Air."

He's threatened by the leader of the thieves Frank (Vincent Cassel), when he can't remember what happened to the stolen painting. He's sent to hypnotist Elizabeth Lamb (Rosario Dawson) to try to unlock his memory. His memory is as superficial as the movie.

The screenplay by Joe Aherne and John Hodge (named after hodgepodge?) stymies the actors. It causes them to flounder.

Rosario Dawson has a key role that should demand intrigue and mystery. But Dawson has no heft. She slides through the inchoate role.

Dawson, who was excellent in Seven Pounds (2006) is bland in a bland part. In Trance she does appear nude and full frontal -- but in Trance she's outacted by her pubes.

Dawson has little if any chemistry with James McAvoy. McAvoy is believable at the beginning with his calm gaze and lilting voice -- "it is imperative not to panic."

But his role quickly plunges him into a murky maze. Also flailing in the maze with Dawson and McAvoy is Vincent Cassel. Cassel embodies sleazy dread and hostility as leader of the thieves.

One thing is for sure. Be careful playing poker with Danny Boyle.

In Trance it looks as though his favorite game is 52 pickup.