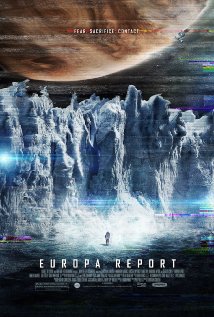 Europa Report is one of those films that may not meet some expectations.

Europa Report is not a monster movie. Although maybe from one point of view, the astronauts could be monsters. At least on Europa.

If one is looking for a monster movie or a Star Child, Europa Report probably won't satisfy him or her.

Europa Report is about a mission into deep-space to Europa, a moon of Jupiter. A private company is financing the mission looking for life in space.

The chief financier of the project, Dr. Samantha Unger (Embeth Davidtz) says, "For six months people watched every moment aboard the spacecraft." But then, "the mission feed goes dark."

Unger reveals that they were left "looking at 15 hours of dead feed." She hoped that the mission "was still going on."

We see what happens. We learn that one of the six astronauts is lost. But instead of giving too much away, our knowledge adds to the suspense.

Although the screenplay by Philip Gelatt is serviceable, the strength of the film is not the story or the characters. It is the style that is remarkable.

Europa Report is presented in the genre of "found footage" - I prefer the term recovered footage.

What makes Europa Report unique is its emphasis on scientific viability. Ecuadorian filmmaker Sebastian Cordero directed the film with a realistic science basis in a semi-documentary style. He utilized NASA Jet Propulsion Lab scientists Kevin Hand and Steve Vance for expertise, as well as Space X.

Enrique Chediak is a masterly cinematographer. He is able to give life to the eight fixed cameras on the spaceship, as well as helmet cams. He brings the characters to the cameras. It's a challenging, brilliant technique.

The cinematography may be disconcerting at times, because of its gaps and static, but it all adds to the feeling of insecurity and danger. The cameras start failing as the spaceship degrades.

Cordero is well served by his actors. The roles are limited, but not as superficial as Bowman and Poole in 2001.

The six astronauts are international, and so is the cast. Chinese actor Daniel Wu plays William Xu, the commander. It is no coincidence that some of Europa Report financing was Chinese.

South African actor Sharlto Copley plays James. His character keeps making tapes for his son, which may remind us of the banal phone conversation in 2001 between a scientist and his young daughter.

Daniel says of the experience, "It's pointless."

It's a hellish, enlightening ride through the heavens.