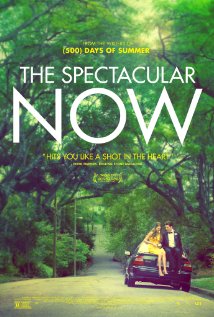 Screenwriters can't be trusted with novels. A recent blatant example is what Sundance-darling hacks Michael H. Weber and Scott Neustadter did to Tim Tharp's fine, articulate novel The Spectacular Now.

In their screenplay, they dumbed it down and chopped it up.

Of course, they changed the ending to make it more conventional, and they added a word that is repeated like a stuck needle on a warped record.

Their canny addition is the word "awesome." Tharp doesn't use it, but it's Weber's and Neustadter's favorite word.

I hate the word "awesome. So it was difficult for me to listen to the dialogue for The Spectacular Now, which sets a record for using the word.

Everything is "awesome" - Ad Awesome Nauseam.

The omnipresent word is replaced by "amazing" - another generation speaks - in the last half hour, but by then it's made its impact - awesomely.

It's intentional, but lazy and annoying. Really. You know. I mean. Unbelievable.

The Spectacular Now is another tale fraught with dysfunctional relationships and teenage angst.

After Sutter (Miles Teller) is dumped by his hot girl friend Cassidy (Brie Larson), he goes on a bender. Sutter's relationships are lubricated by alcohol.

When he wakes up, he meets Aimee (Shailene Woodley), a shy schoolmate. They create a bond, which challenges and tests both of them.

The direction and acting are both better than the screenplay. Director James Ponsoldt is especially adroit at getting genuine performances from his actresses.

Shailene Woodley wasn't able to show her range and sensitivity in her one-dimensional role in The Descendants (2011), but in The Spectacular Now Ponsoldt guides her through a multi-leveled human experience. She gives the best performance in the film.

In a role that could be drab, Mary Elizabeth Winstead shines as Sutter's sister Holly. And Jennifer Jason Leigh, as Sutter's mother, is convincing.

Miles Teller, as Sutter, has a less focused role. His character is all over the place. Sutter is very popular as a high school senior. He's confident, self-effacing, impulsive, and fun-loving. He loves booze. But his zealous confidence hides fear - of course. Teller is mostly credible as the mercurial Sutter.

Director Ponsoldt's final shot of Aimee is memorable, because it leaves a little opening for interpretation.

But the writing is as subtle as a Slurpee - even a spiked one. Weber and Neustadter, who wrote (500) Days of Summer (2009), avoid some of the smug coyness they invested in that film. And this time they have Shailene Woodley delivering lines rather than the very limited Zooey Deschanel. Fortunately, Woodley's facial expressions transcend much of the dialogue.

The writers of the screenplay turn the crucial scene in a bar with Sutter's father (Kyle Chandler) into the usual stuff. In the book it had texture, but they take the texture away. Read the book - the $20 bill is a nice touch. In the book it's a scene with nuance.

The fateful accident is more credible and nuanced in the book. But Weber and Neustadter only would recognize nuance if it were "awesome."

When I purchased Tharp's novel, the checkout girl asked me, "Did you find everything ok?"

Guess what she said?