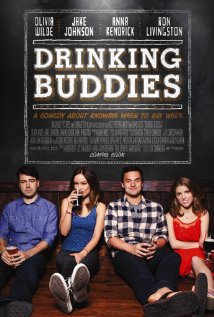 I admired her in tv's House. I even affirmed Cowboys and Aliens (2011). But when I heard she was appearing in a nonscripted movie, I was leary. As much as I liked her, I didn't want her to create her own dialogue.

Olivia is no Leigh Brackett.

Joe Swanberg, director of Drinking Buddies, has said he gave his actors a "two-page bullet-pointed list of scenes." That was the script.

Like a pimp, he was counting on his minions to spread their wares for his benefit.

Actors act. But in Drinking Buddies they also mutter and blather. The written word is so, like, yesterday.

I hoped Olivia could prevail. Without an accomplished writer, could she develop and embellish her character?

With creative language stripped away, Olivia Wilde flounders. I'm afraid I'll never again quite see her as I once did. By the end of Drinking Buddies, I cringed every time she was about to open her mouth.

Drinking Buddies is a rom-com rumble about contemporary relationships. Kate (Wilde), who manages a brewery in Chicago, has a boyfriend Chris (Ron Livingston). One of her co-workers at the brewery Luke (Jake Johnson) has a girlfriend Jill (Anna Kendrick).

The four share a cabin on a weekend, and after the trip together, the relationships change.

She says, "When it comes to weddings you want something that you know most people are going, like, to get sufficiently drunk." She swallows the line.

Rewrite! Oh, how can one rewrite when there is no writer? But who needs one in a film like this?

Unfortunately, the opening gambit is as good/bad as it gets.

Ron Livingston, as Chris, decides repetition works for him. He plays Mr. Echo.

Jake Johnson, as Luke, isn't left behind. He too is smitten by repetition.

As Jill, one of Anna Kendrick's first lines is, "Yeah. Yeah. Yeah."

Director Swanberg - who also "acts" amateurishly as an angry driver - turns Olivia Wilde fatuous. Of course he has her enthusiastic participation.

In her next film - Rush directed by Ron Howard -, let's hope screenwriter Peter Morgan wrote some worthy dialogue for her.

Drinking Buddies is a hodgepodge of banal arguments, vapid characters, and inconsequential relationships. Language is degraded.

Drinking Buddies is the near beer of movies.

Rise of the Planet of the A...