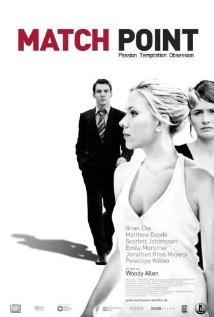 Woody Allen is standing up to the tiger at the gates. This contemporary tiger is sloppily gnawing language and mutilating culture.

Woody is not impressed. He's standing his shifting ground, both in America and abroad.

Woody is a man who cares about language and culture - both their integrity and their corruption. He started out as a diverting entertainer; but he became an artist.

Woody bridges the creative world of the 1970s - the golden age of American cinema - into the present. His films in the 21st century are personal. Irony is active. Alienation is basic. Woody is keeping a vibrant past alive. Woody's sense of culture goes beyond just tomorrow or yesterday.

Woody still is a literary man in an increasingly one-dimensional world of filmmaking, at a time when most movies have forgettable, connect-the-dots screenplays [explosion, explosion, bathroom joke, explosion].

Yes, Woody allows improvisation, but like Robert Altman, he is a master at controlling it. He is a writer with a writer's sensibilities.

Match Point (2005) may just seem a nice change of pace for Woody Allen. It's a clever lob into Hitchcock territory.

Woody has learned well from the masters of cinema that have come before him. In Interiors (1978) he channeled the starkness and angst of Ingmar Bergman. In Vicky Cristina Barcelona (2008), he channeled the tone and narrative technique of Francois Truffaut. And in Match Point, he channels Hitchcock.

Match Point is a story fraught with guilt, fear, and deception. It's a dark fable about wealth, status, and the power of fate.

Match Point is the story of Chris Wilton (Jonathan Rhys Meyers), and his fateful evolution. He is a cool, calculating man on the rise. He is a "poor boy from Ireland" who has come to London.

Chris has had some limited success as a tennis pro, but retires from the game and is hired to teach tennis to the well-to-do. He meets Tom Hewett (Matthew Goode) and pretends to have similar interests with him.

Tom is impressed and invites him to join his family at the opera. There Chris meets Tom's sister Chloe (Emily Mortimer), an earnest, pleasant, unassuming woman. She falls for him.

At the Hewett family mansion, Tom also meets the sensual Nola (Scarlett Johansson), who is engaged to Tom. As an American from Boulder, Colorado, Nola shares Chris's sense of being an outsider. They also share a clandestine lust.

Woody weaves a tale of deceit, passion, and destruction. Fate wins out at the end.

In the opening narration, Chris quotes "I'd rather be lucky than good." He uses the metaphor of a ball on a tennis net. He says, "Either it goes forward and you win. Or maybe it doesn't, and you lose."

There is no way to control how the ball is going to fall. Fate decides. Woody knows the game of life.

The film is spangled with almost-coy allusions. Chris Wilton's eventual mother-in-law Eleanor is portrayed by actress Penelope Wilton. Like Altman in Images (1972), Woody plays with names. The surname of the character Chris is Wilton, which is the name of the actress.

The surname of the wealthy family is Hewitt, and Woody well knows the Hewitt private school in Manhattan.

The script is strong. Alec Hewitt (Brian Cox) says to Tom about Chris, "He's not trivial. I had a very interesting conversation about Dostoyevsky." What other popular contemporary filmmaker could get away with such dialogue?

Match Point has some of the feeling of Hitchcock's Frenzy (1972). In Match Point, inspector Dowd (Ewen Bremner) may be reminiscent of Chief Inspector Oxford (Alec McCowen) in Hitch's film.

But, perhaps, the greatest parallel between Woody's Match Point and Hitch is duality. It's a brilliant device.

In Match Point, there are two social classes and two marriages. There are two pregnancies for the major characters.

There are two births, two murders, two aspirin, two barrels in the shotgun, and two wedding rings - one on Chris's finger, the other flying through the air.

Pairs of pictures are on the walls. People constantly walk in pairs. There are two detectives.

Perhaps the most sly of the dualities is at a crime scene when a detective calls out to one of his officers, "Chris. Chris."

Duality seemingly offers a choice - do you use peanut butter or cheese for mice?

In Match Point, fate outmaneuvers choice. It's best to be lucky, isn't it?