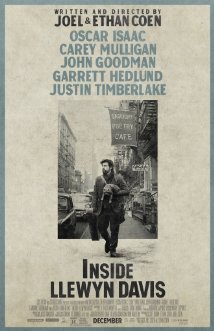 Inside Llewyn Davis is a brilliant work of art.

The Coen Brothers' latest film is brimming with meaning, but since it's episodic and elliptical, the levels of meaning may go untapped. Let's hope viewers invest in the film.

Set in 1961, it focuses on folksinger Llewyn Davis (Oscar Isaac) and his hardscrabble existence living on the verge in Greenwich Village.

He depends on others for food and shelter, going from apartment to apartment and couch to couch. It's a peripatetic journey through the Village and his own soul.

Llewyn has talent, but as a manager tells him he lacks the "It" quality.

The Coens develop him as a flawed human character - self-absorbed, selfish, at time loyal, at other times extremely nasty. He's uncommitted to anything other than his talent. And even that commitment fails him. He's adrift on the mean streets.

He refuses to compromise, except for an occasional paid gig, such as his being part of a trio recording a silly ditty. But he spurns any royalties.

Inside Llewyn Davis is not a success story; he's not the generic likable character. But it is a tale of a man's striving and ultimately some resolution. At the end, Llewyn's performance of a song will reveal a significant change in him.

Some viewers may think Inside Llewyn Davis is a mere diversion. Others may think the film doesn't go anywhere. Of course, it does. It's life.

The Coens' screenplay is sly, symbolic, and metaphoric. There is a mine of piquant allusions to actual people. A major influence in the film is Dave Van Ronk's book, The Mayor of MacDougal Street. There also is a mine of terrific music. T Bone Burnett assembled the music for the film. "Hang Me, Oh Hang Me," written by Van Ronk, is a major song in the film.

Inside Llewyn Davis may well be the most evocative film of the year. Cinematographer Bruno Delbonnel, stands in for Coens-regular Roger Deakins. Like Deakins, Delbonnel is a necromancer of light. Shafts of brightness cut through dingy settings. Production designer native New Yorker Jess Gonchor creates nostalgic authenticity.

Oscar Isaac is a paragon of brazen diffidence and doubt as Llewyn. Carey Mulligan is both uplifting as she sweetly sings on stage and disconcerting as she spouts "asshole" constantly at Llewyn.

John Goodman unleashes ugly power as the mean-spirited, drug-addicted jazz aficionado who insults folk songs and folk singers. The rest of the cast peoples the Coen universe with odd personality.

There are some wonderful moments in the film. A cat intently watches out a subway window as stations hurtle by. A trio on stage - Jim, Jean and Llewyn - sing a version of "500 Miles" that could bring tears to your eyes. Llewyn sings Ewan MacColl's "Shoals of Herring" to his mute wreck of a father sitting at a rest home, and there's a flicker of contact that draws a "wow" of surprise from Llewyn. It's a Coen world of waste and wonder.

There are levels to be plumbed. There are dissonant dualities as well as holy and unholy trinities.

There are two cats - Ulysses and Tonto, duet Jim and Jean, father and son, husbands and wives, partners - here and gone - two doorways at the end of a long hall, two pregnancies, a cowboy and his wife, two heritages - Llewyn says he's Welsh and Italian. There are dual identities - Al Cody in film has changed his name. [Elliott Adnopor changed his name to Ramblin' Jack Elliott.] There's a certain irony that Bobby Zimmerman changed his name into Bob Dylan, using the surname of the great Welsh poet.

It's also edifying to note that the Coens and Zimmerman both were born and bred in Minnesota.

The trios are intriguing. Llewyn joins Jim and Jean on stage. Llewyn visits his sister and her son. He shares a car ride going to Chicago with two mysteriously-threatening men. The man mocks the "three chords" of folk music. There are three cities in the movie: New York, Chicago, and Akron, Ohio. Akron is the glittering city in the distance. Akron means "summit." Will Llewyn reach it?

Life is fortuitous. Inside Llewyn Davis is full of accidents. A cat escapes an open door, there's an accident in the darkness on a highway, and Jean was impregnated accidentally. She doesn't know which man impregnated her.

Fate rules. A cop stops a car. A sister throws out important papers.

Inside Llewyn Davis may appeal most to creative people. It shows that talent abjectly may lose. Talent may be rejected, undiscovered, or ignored. Talent might not matter. Becoming artful may mean nothing - except perhaps to the artist. Even he may lose his way.

[The film may appeal most to those who never.... Being a critic on the web/radio is not exactly formidable].

In a lesser film, Llewyn would succeed, and the audience would be pleased.

But in Inside Llewyn Davis, Llewyn's decision to sing the last song is as much as we get. Llewyn and his ilk never reach their dream.

As the music scene in the 1960s in Greenwich Village shifted, Van Ronk held on. He wrote, "I was one of the New Yorkers to stick it out, and that was because I was stuck with it."

In Inside Llewyn Davis, the Coens reach the summit.