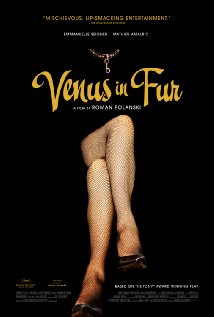 Venus in Fur bristles with possibilities - some intriguing, some galling.

Adapted from a play by David Ives, based on a novella by Leopold von Sacher-Masoch, it's stagebound but vaults into multi-faceted imagination.

Since it's directed by Roman Polanski, it careens into dark places. It has Polanski's themes of obsession, repression, and alienation. It's also steeped in comic incongruity.

It's no wonder that the play appealed to Polanski. Venus in Fur is a piquant study of perception.

On the surface, it's a story of Vanda (Emmanuelle Seigner) who arrives late out of the rain for an audition in a Paris theater. The theater is empty except for Thomas (Mathieu Amalric), a first-time director who has adapted a two-character novella published in 1870.

Thomas has no interest in Vanda and tries to put her off. He's spent a day being frustrated by superficial, talentless, young actresses trying out for the role.

Vanda has nothing to recommend her. She is sloppy and vulgar. But she keeps insisting on an audition from the nonplussed Thomas. Eventually he reluctantly accedes to her will.

Thomas reads the male role of Severin, although he tries to avoid certain passages.

The two figures slip into character and out of character. At times it's difficult to figure out whether it's the character or actor or both speaking. There's role reversal and role rereversal.

Some audiences may find it drivel; others will find it fascinating.

One of the major themes of Venus in Fur is how people see things differently.

Is imagination more real than actuality?

What is real? Vanda mimes a slap at his cheek. She mimes a stroke of his face. She mimes a kiss. She mimes whipping with a cane. They both reach out to mime a handshake, but they don't touch. Vanda thinks the mimed handshake is "electric." Later Thomas says, "You electrify me."

One time Thomas smokes a cigarette that is not real; it has no smoke. Later he has another one that has real smoke.

In a scene reminiscent of the mimed tennis ball which makes sounds, at the end of Antonioni's Blow-Up (1966), in Venus in Fur, Thomas mimes carrying a cup of coffee. We hear the clatter of the china. Why do we hear the sound?

The casting of Thomas and Vanda provokes added interest. Mathieu Amalric bears a striking resemblance to a younger Polanski. And Emmanuelle Seigner, who plays Vanda, has been married to Roman for 25 years.

Some viewers have suggested that she's too old for the role, but that misses the point. What is not in the film, however, is the 32-year age difference between Polanski and Seigner. He is 80; she is 48.

Polanski is a personal director. He dealt with the murder of Sharon Tate, when he changed Robert Towne's ending in Chinatown (1974) to angst-filled fatalism.

The dialogue is a spate of biting language. It's also amusing. Vanda says, "You sold your soul for alliteration."

Vanda says the play is, "Ambivalent."

Some of the dialogue obviously stuck a personal chord with Polanski.

He responds, "Yes. Years of study."

Thomas says, "And my woman must be my muse."

Like the recent film Locke - limited to showing one character in a car - Venus in Fur relies on language to express its humanity. Both have exceptional film language and exceptional spoken language.

In both films, language is transcendent.