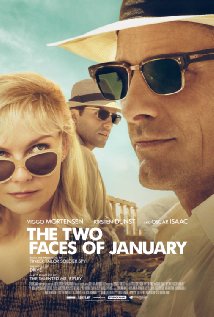 The Two Faces of January is one of the best films released so far in 2014.

It's convoluted, but it's taut and surprising.

It's a story steeped in deception and intrigue. Set in 1962, it begins in Athens, Greece, at the Parthenon. Rydal (Oscar Isaac), a tour guide, is taking a group of young women around the ruins telling them about the myth of Theseus and his father. It is a myth that comes to relate personally to him.

Chester MacFarland (Viggo Mortensen) and his wife Colette (Kirsten Dunst) also are viewing the surroundings. As they walk, Chester reads from a guide book, "The ancient Greeks were masters of deception." And so the overriding theme is introduced.

As the couple sits at an outdoor table, Chester sees that from another table Rydal is looking at him intently. Chester doesn't know that he reminds Rydal of his father. When Rydal goes to the bathroom, Colette follows him to find out why he is showing such interest. They meet outside the bathroom which is occupied and they talk.

Back with her husband, she tells him that Rydal is going to take them on a tour.

On the tour through a marketplace, Rydal cons them out of a little money. He is a small-time cheat. Little does he realize that Chester is a big-time cheat. Chester is trying to elude clients whom he bilked out of large sums of money. He was one of the heads of a brokerage firm in New York, and absconded with the money.

On the tour, the three get along, and they go out to dinner together that night. Rydal brings a rich young woman, whom he is putting a move on. In a cab, Rydal realizes Colette has left her bracelet that she bought at the market. He takes the cab to the hotel at which the MacFarlands are staying, and sends the girl home with a kiss. That's the end of that relationship. A more intriguing one is at the hotel.

In the hotel a private detective has gone to the MacFarlands' room, and after discussion with Chester in the bathroom pulls a gun on him. Chester reacts, and fate intrudes. Chester, Colette, and Rydal go on the run to Crete. The fateful showdown is set for Istanbul.

The relationships between the three are sometimes duplicitous, sometimes helpful. Whom does one trust? It's hard to know. Betrayal is always in sight.

The Two Faces of January has great bloodlines. Hassein Amini, who is directing his first feature film, gives a thank you in the final credits to the late directors Anthony Minghella and Sydney Pollack. They were the original producers of the film.

Amini also channels a bit of Hitchcock. Amini's screenplay for The Two Faces of January is based on the novel by Patricia Highsmith. Hitch did a film from Highsmith's novel Strangers on a Train (1951). Minghella directed The Talented Mr. Ripley (1999), based on a Highsmith novel.

Amini in his direction also seems influenced by the French New Wave and perhaps by some Italian filmmakers.

But the Highsmith/Hitchcock theme of dualities seems paramount.

The month January was named after Janus, the Roman god with two faces. He is the god of beginnings and endings, gates and doors, passages. The Two Faces of January is a long sojourn through multiple passages, physical and psychological. It begins in bright sunshine and ends in wet night.

As Hitch did in Strangers on a Train, Amini has created a world of dualities.

There is an abundance of pairs: two con men, two fathers, Chester has been married twice, the private eye came to Europe twice, two sightseeing groups, after dinner the two women walk together with the two men walking behind them. The two men are in a wild chase in Istanbul.

Objects come in pairs: two suitcases, two sails in the myth, two passports, a photograph of Rydal as a little boy holding his father's hand as they stand by the surf, two surveillance photographs, two photos of Colette, two buses, two sinks with two mirrors.

Names come in pairs: Colette has two names - Colette is not her original name, the brokerage firm was Dunleavy and Walters.

His three main actors are gifted. Mortensen is credible as the man caught in a web of insecurity, distrust, and threat. Oscar Isaac, who was effective in Inside Llewyn Davis (2013), gives depth to the unsettled hustler. Kirsten Dunst is fine as the elusive Colette. All are able to suggest ambivalent entanglement.

The Two Faces of January is only 97 minutes.

But it should take days to think about it.

A Most Violent Year