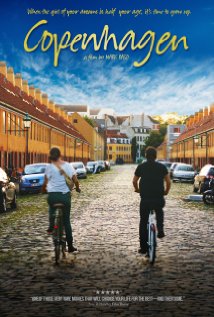 Copenhagen is one of those films that shimmer after they've ended. It's still shimmering. Brightly.

It begins with little suggestion that it's going to be memorable. It introduces a character William (Gethin Anthony) who is arrogant, self-absorbed and speaks crass dialogue.

William is one of a trio of characters who are visiting Denmark. He's with Jeremy (Sebastian Armesto) - now 28, they have been friends since they were seven years old. With them is Jeremy's girlfriend Jennifer (Olivia Grant), whom William has bedded more than once.

At this point, one might expect a mumblecore mess.

William is in Copenhagen to deliver a letter from his late father to his father's father. His father wrote it as an eight-year-old boy in America. It's written in Danish, a language William doesn't know.

Jeremy and Jennifer depart for London with plans to get married, leaving a frustrated and piqued William on his own.

Up to this juncture, we don't care about any of the characters. But into this negative morass comes a flash of light - Effy (Frederikke Dahl Hansen). She is a student intern at a hotel.

Effy takes William to see the sites and to go on an odyssey to find his grandfather. But it's even more an odyssey into William's humanity. Effy is personally interested in such a journey. It's an uncertain trek into the human condition.

Copenhagen is the first feature film directed and written by Mark Raso. Canadian-born Raso is a MFA graduate from New York's Columbia University.

Like director/writer Tom McCarthy, Raso is an intelligent, literate, personal humanist. It's a dwindling tradition. I hope Raso can elude the cold clutches of the industry.

He leaves his first film open-ended. Near the end, a crucial line - like Jack Nicholson's final line in Chinatown (1974) - is mumbled. By William into Effy's neck.

Rosa is extremely fortunate in his two leading actors. They raise the stakes.

Gethin Anthony, as William, is reminiscent of Ewan McGregor with a touch of Mickey Rourke.

Frederikke Dahl Hansen belies her 19 years in her sensitive portrayal of 14-year-old Effy. She brings resourceful innocence to life. And she can hold the screen - e.g., when Effy takes the open mike at a bar and sings with a thin but tantalizing voice. It's an evocative movie moment.

Director/writer Raso creates an experience as open as life itself. Do the two have sex? Maybe when the director wasn't looking. Probably not, but maybe. You figure it out, says Raso.

Raso trusts the experience. Ultimately, he doesn't force it.

Copenhagen is full of lies and deception. All the characters promote illusions.

But in a world of illusions, Copenhagen tells the truth.