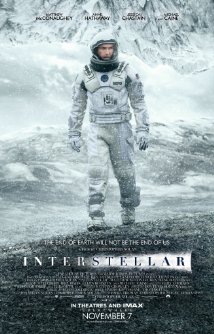 Interstellar is majestic and ridiculous.

I think I saw a kitchen sink flying through space. And I may have seen M. Night Shyamalan behind a planet.

Interstellar is the story of a family - plus some scientists and astronauts - trying to save the human race.

It's a big concept on a big screen.

I was fortunate to see Interstellar in one of the 37 theaters across the country which are showing it on IMAX 70mm. The print is 800 pounds.

That's a mammoth print for a mammoth film. The dialogue is woolly mammoth.

The screenplay by the Nolan boys - Christopher and Jonathan - is more prose than poetry. Just quoting Dylan Thomas does not make the ponderous poetic.

Professor Brand (Michael Caine) tells astronaut Cooper (Matthew McConaughey), "By the time you come home, I'll have solved the problem of gravity." Unfortunately, he can't solve the problem of being interesting.

As a director, Christopher is no Kubrick. He substitutes a Star Old Lady for the Star Child.

Christopher Nolan is more plumber than artist, but he's a hell of a plumber. He knows his gravity.

The first part of Interstellar is clunky, but about an hour and 15 minutes in, there's a scene that is memorably human. Cooper in his space craft listens to and sees on a screen 23 years of messages from his two offspring, Murph and Tom. It's genuinely moving.

But the symbols throughout clunk. One astronaut is named Mann, and you ought to see how he behaves.

There are several lines and scenes that may provoke a chuckle, although I doubt if they're meant to.

When two astronauts have a rough and tumble fight on icy, barren terrain, it's more silly than it should be, especially when one keeps spouting about "survival" and "children."

The cast tries to stay out of the way of special effects, which throw it aside. Matthew McConaughey, as Cooper, makes an adequate C-figure, and Jessica Chastain is fine as his adult daughter. Anne Hathaway (astronaut Amelia - get it?) seems like she is searching for a song to sing.

Interstellar has connections with television. It often seems like an outlandish episode of Forever or Scorpion. A character, who gives a tour, is played by Elyes Gabel, who stars in Scorpion. Bill Irwin, the voice of TARS in Interstellar, plays the cardinal on Blue Bloods. Religion in a robot?

Two qualities one yearns for more of in Interstellar are humanity and silence. Like a wagging tongue, Interstellar makes one appreciate blessed silence, since it has so little.

Interstellar is a rock opera, but the rocks have turned to dust.

For too much of its length, Interstellar is hokum in a syrup of sound. It's interstellar elevator music.

For part of the time, Interstellar is a thrilling, lurching space ride.