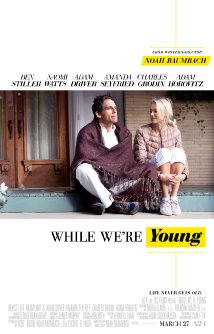 Most people go to a movie with preconceptions. Expectations.

Sometimes critics go to a movie with only dire preconceptions. A director or actor has burned him or her badly in the past.

I have been avoiding writer/director Noah Baumbach ever since The Squid and the Whale (2005), which I found ink and blubber. I found Baumbach's work banal, pretentious, and self-indulgent. I didn't want to go into that murky ocean again. Jeff Daniels is one of my favorite actors, but Baumbach sank him.

Recently I read some positive reviews and got affirmative feedback from a film enthusiast I know about Baumbach's latest, While We're Young.

I realize that people can change - occasionally for the better. They also can go the other way. I admire the work of writer/director Tom McCarthy. I put his three previous films on my best ten list each year they were released - The Station Agent (2003), The Visitor (2007), and Win Win (2011). Then there's his latest film The Cobbler (2015). Ouch. It smacked my sole.

I kept putting off seeing While We're Young, but in a moment prepared for masochism, I decided it was time.

While We're Young was a rare experience - it vaulted over my dire preconceptions. It's a really good film.

How did that happen? The writing is engaging; it's not the snide approach I expected. The cast is excellent. Ben Stiller (Josh) and Naomi Watts (Cornelia) play a married couple approaching their middle 40s who have a life on cruise control, but going nowhere. Naomi Watts makes the film work as well as it does, because she avoids schtick. She's not showy; she's genuine.

Also effective are Adam Driver (Jamie) and Amanda Seyfried (Darby) as a couple in their mid-20s who effect the lives of the older duo. Jamie and Darby meet Josh at a lecture he is giving at the New School in NY. Josh is a documentary filmmaker who is in a nearly-9 year process of assembling his latest film.

After the lecture Jamie approaches Josh with ebullient admiration for his work. Jamie and Darby go out to dinner with Josh and Cornelia, and a bond is forged. The older couple's nearly-somnolent existence is revived by the younger couple's spontaneity and enthusiasm. But it all comes with a cost.

How the characters deal with the costs of life is the marrow of the film.

The screenplay by Baumbach uplifts the film at times. Generosity replaces the snideness. But the generosity in the film runs the gamut from naive to exploitative. It too can come with costs.

There are two scenes where Baumbach loses his light touch. One is when the two couples attend an "ayahuasca ceremony" - Shaman-led, with psychedelic Amazonion tea that makes one vomit up bad forces. Shades of Greta Gerwig. Baumbach is her boyfriend. That scene made me remember the Baumbach I have a hard time standing.

The other heavy-handed scene is when Josh makes a pitch for financing for his film. He prattles on with obvious jargon. It would be much more convincing with a little subtlety.

One of the best qualities of Baumbach's screenplay is how two generations see each other differently and how things have different meanings to each. It's one of the best portraits of the difference in generational points of view since Steve Shagan's script in Save the Tiger (1973).

Baumbach and company also have a clever casting when they use Peter Yarrow of Peter, Paul and Mary as a source for Josh's film and Beastie Boy Adam Horovitz as a stay-at-home dad. That's smart.

Perhaps the major asset to While We're Young is the editing, credited to Jennifer Lame. Its quick cuts make it brisk and breezy. Pretension doesn't have time to be tiresome. The editing is invigorating. And the film is well under two hours.

While We're Young made me smile.