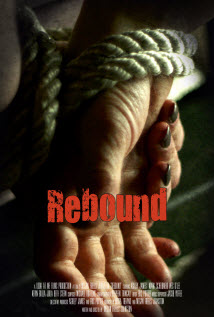 Making an independent film is a haphazard ordeal.

Rebound is produced, written, and directed by Megan Freels.

The budget for Rebound, including post production, was just $20,000. "Almost everyone worked for free," she has said. But "free" does not necessarily mean talent.

Rebound is the story of Claire (Ashley James), who discovers her boyfriend in bed with another woman. She goes on the run to try and escape the psychological demons the affair has created. On the road, she faces other demons, one in the form of a strange man, Eddie (Mark Scheibmeir). Can one choose between demons?

I think the best indie films I've seen have superior acting in them; it goes a long way. Acting is not a strength in Rebound; it often is stilted. Ashley James is passable, not memorable. Mark Scheibmeir has a presence with a forceful, somber expression - especially in a scene at a bar. But when he talks and acts, he's in trouble. It would be interesting to have him never speak, only react.

For a film - indie or not - in 2015, the sex in Rebound seems dated. The woman having sex (Ali Williams) is wearing a bra. This is not Janet Leigh in Psycho (1960). And the bodies engaging in the sexual act are covered discretely. The woman also has an expression like one of the villains in a Sergio Leone western. Megan, I'm sure there are better actresses out there who are willing to bare their bodies for their craft.

Credibility is crucial, and it's somewhat lacking in Rebound. Eddie says his father beat his face, but there's no evidence. And the dialogue at times is strained.

Freels's use of lighting (cinematographer Stephen Tringali) is effective, but the music is intrusive. There are a few nice symbolic shots, e.g., the slow closing of a gate. And the final shot has a natural, credible quality that is perhaps the best in the film. It offers hope for the filmmaker's future.

Rebound is an earnest, if faltering, first step.