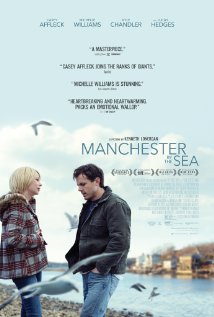 Manchester by the Sea has been glorified by reviewers. They have broken the bandwagon by piling on it.

What's the fuss all about?

It has been given 79 fresh reviews out of 80 on Rotten Tomatoes. Only one negative response. 79 out of 80. It's been called the best film of the year, with the Oscar guaranteed to Casey Affleck.

I wish I loved the film. I don't. I have problems with it.

The film society to which I belong may choose it as best of the year. I'll vote for Casey Affleck as one of the ten best male performances of the year. But even in a down year, not the best performance.

I wasn't going to review the film, but I want to give some solace to those who may think it is not a great film. I want to support that lonely dubious reviewer who didn't go ga-ga over it.

The most favorable amount of email I ever received was in response to my review of Boyhood (2014). I found out there were people out there who didn't applaud the film as I didn't. [In fact, I won money on Birdman when Boyhood had been the odds-on favorite to win the Oscar]. I received many letters of thanks for rendering an opinion that they hadn't seen elsewhere and with which they agreed.

Maybe the audience will adore Manchester by the Sea, but I know some won't. I believe in Dwight Macdonald's statement, "A reviewer tells what the audience thinks, a critic tells what he thinks."

And, for better or worse, I'm a critic.

The labored music intrudes often. There is crooning music when Lee (Casey Affleck) drives his car, and string music when he is given important information.

The Lame editing of flashbacks may disconcert the viewer unnecessarily. It's Lame. No, really, the editor is Jennifer Lame.

But the major liability may be the film has little arc. Boyhood at least had the passing of years. In Manchester by the Sea, the main character has little growth or resolution. I'm not asking for full redemption. I hope for change in character, but the change is minimal. Lee is pretty much the same that he was at the beginning. The film lacks arc and is pretty much flat.

It may depend on how much of a fan you are for lingering guilt.

Manchester by the Sea is well-made and solid, but it is not a great movie.

It's the tale of Lee Chandler (Casey Affleck), an ill-fated janitor, who becomes legal guardian of his nephew 15-year old Patrick (Lucas Hedges), and has to deal with a brutal past and a shaky future.

It is the third feature film by writer/director Kenneth Lonergan. His first, You Can Count on Me (2000), promoted actor Mark Ruffalo, who had appeared Off-Broadway in a play by Lonergan.

Ruffalo and Casey Affleck share a puppy-dog quality, which seems crucial to Lonergan's vision. He likes blank looks. Producer Matt Damon originally was to play the leading role, but he doesn't have nearly as blank an expression as Affleck.

An actor who is a Lonergan veteran is Mathew Broderick who appeared in You Can Count on Me. Broderick appears in Manchester by the Sea, but his part is awkward and brief as the very religious husband of Joe's former wife Elise (Gretchen Mol).

Michelle Williams as Lee's ex-wife has a showy if not entirely credible big scene with Lee.

Manchester by the Sea is a 135-minute cruise through choppy, melancholy waters.

Given the ending, it could be called, "Gone fishin.'"