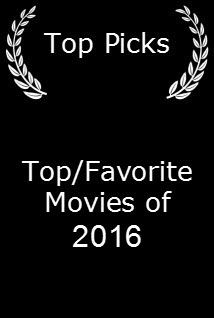 2016 probably has been my worst year since I pulled a Holden Caulfield and ran away from home when I was in the 9th grade.

2016 also has been a bad year for me at the movies. It's made me think I may be the Holden Caulfield of film critics. Maybe there is no place for me.

I ran away from La La Land and Manchester by the Sea -- both reviewers' darlings and the two favorites to win the Oscar for Best Picture of the Year.

Okay. Maybe they can join the Trump cabinet.

This is a thoughtful, quality movie that is simmering with alienation. It may remind one of the Golden Age of 1970s American movies. Director David Mackenzie creates a journey through barren West Texas, where a veteran Texas Ranger (Jeff Bridges) pursues two outlaw brothers (Chris Pine and Ben Foster). Bridges will get a nomination as Best Supporting Actor. It's an ironic, spiritual quest, which makes for a very human drama.

This is a nearly-perfect small movie. It delivers beautifully on what it sets out to do. It is based on an actual meeting that Elvis had at the White House in 1970, in which he sought to be a Federal Agent-at-Large. Director Liza Johnson was blessed to have Michael Shannon (Elvis) and Kevin Spacey (Nixon), and she smartly stayed out of their way. Spacey is terrific as Nixon. Shannon is the poster boy for, "Who was that guy who was in that thing?" In 2016 Shannon acted in Elvis & Nixon, Midnight Special, Loving, Frank & Lola, and Nocturnal Animals. But few moviegoers even know his name. He brings wit and stubborn charm to Elvis. Again, a film in which humanity dominates.

Each year I seek out a movie that I can recommend to nearly everyone. This year it was Dark Horse. It's a feel-good movie, but it is very genuine. It's a documentary with heart, soul, and actual people. Animal lovers alert. Director/writer Louise Ormond captures life in Cefn Fforest, a former mining village, in Wales. The community of lively folks gets invested in a spindly horse. Will it give them hope? It really does. And us, too.

Coping with this film raises the age-old question, how much does a creator's personal life affect the way we should view his or her movie, if at all? Woody Allen, Roman Polanski, Mel Gibson. Now Nate Parker, the writer, director, and main actor joins the above. Parker's film has been stigmatized by many viewers, who refuse to even see it, because he was accused of rape when he was at Penn State University. The Birth of a Nation is a powerful, visceral film about Nat Turner who led a two-day slave rebellion in Southampton in 1831. Parker has humanized Turner, but a lot of people won't see this memorable film.

After my top four, there's an uneven spate of good movies.

For me, Born to be Blue has the best male performance of the year. It's the most powerful. Ethan Hawke gives a phenomenal rendering to the exploits and downfalls of actual jazz trumpet player Chet Baker. He has depths that Casey Affleck -- the favorite for the Oscar for Manchester by the Sea -- could only give a sullen look. Very few people will even see Hawke's brilliance, and that's a shame.

I have two films on my list written and directed by Jeff Nichols. Loving is the most important, and Midnight Special is the more entertaining. Each emphasizes the human condition. Joel Edgerton and Michael Shannon are in both. Edgerton and Ruth Negga star as the mixed race couple who get married, but their union is illegal in Virginia, and they are arrested and ousted from the state. Their case eventually winds up in the Supreme Court. As the Supreme Court undergoes radical changes in the future to come, Loving may be a film we look back on with even more acute perceptions.

This film invites you to suspend your disbelief. If you can, it should register. It's the story of an 8-year-old boy (Jaeden Liebecher) who has special supernatural powers. He is protected against government and cult forces by his father (Michael Shannon) and his father's friend (Joel Edgerton). They flee on a gripping journey toward knowledge. The film is both earthbound and transcendent. Director/writer Jeff Nichols is like Tom McCarthy. He has a vision that is perceptive. Nichols and McCarthy keep humanity personal and fertile in their films.

Natalie Portman gives a dazzling, sensitive portrayal in the best female performance of the year. Almost a certain Oscar winner. When the actual Jackie Kennedy gave her television tour of the White House, I found her voice extremely annoying. Portman does that scene and nails the voice. It's a creative accomplishment. Portman is memorable as the woman who has to cope in the horrible throes of her husband's assassination. She is both anguished and bold, and Portman is compelling portraying both. Director Pablo Larraine creates a film that reimagines -- it adds dialogue and manipulates encounters with credibility, while keeping the base of actuality.

This film had the best odd couple of the year. It shouldn't work as well as it does. A chubby 13-year-old (Julian Dennison) and a weathered old loner (Sam Neill) flee the law together and bond with wit and aplomb. New Zealander, director Taila Waititi gives the film irrepressible verve and rare intelligence. It's a charming sleeper.

Veteran directors Clint Eastwood, Warren Beatty, and Mel Gibson made capable efforts in 2016, but the veteran director who best succeeded was Oliver Stone. Stone surprised with an understated treatment of a controversial event. Joseph Gordon-Levitt gave a worthy, quiet performance as the activist whistleblower. No kazoos; just a soft whistle.

Rectify, on television, deserves to be among the above because of its unique focus on humanity, its quality, and originality. Holden lives. Daniel Holden (Aden Young), that is. I never thought I'd see a performance that couldn't be matched, but Aden Young gives it. He owns the role of Daniel. In Rectify, Young portrays a former ex-Death Row inmate, who is released after nineteen years in prison and returns to his family in fictional Paulie, Georgia. Aden Young is wonderfully understated; he captures the wounded decency and repressed angst of a brutally-alienated human being. It is a performance of unforgettable feeling. And intelligence. Rectify is beautifully acted throughout, with characters who evolve (e.g. Teddy from callowness to wisdom), Rectify recently ended the series, after four seasons and thirty episodes. It was television creativity at its finest. It is due to Ray McKinnon, who created, wrote, and at times directed, so his vision prevailed. My only complaint is that Rectify -- like so many movies this year, e.g. Manchester by the Sea -- had music that intruded. Ray, your dialogue is true. Please let it breath. Otherwise, Rectify is a marvel.

In 2016, irony and alienation still live at the movies. And character still abides. But it's up to us to find it.

Hunt for the Wilderpeople

Born to Be Blue

The Birth of a Nation