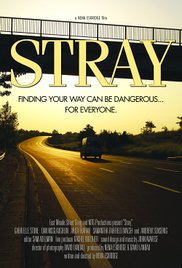 Content by Tony Macklin. Originally published on May 1, 2017 @ tonymacklin.net.

Stray is a one-of-a-kind indie film.

Reportedly shot for less than $60,000 in Chestnut Hill, Pennsylvania, Stray is something of a miracle. It's not just special because of its meager budget. What makes it memorable is the vision and ability of its writer/director Nena Eskridge.

Like many indie directors, Eskridge knows her Hitchcock, e.g., she has an image of a figure behind a shower curtain reminiscent of Psycho (1960).

But she's not just channeling Hitch; she is more mature than that. Eskridge has her own individual vision.

Stray is the story of Jennifer (Gabrielle Stone), a damaged soul on the run. She is unpredictably lethal. What will she do? What has she done?

Early in the film Eskridge establishes a feeling of well-lit dread. Is it a man or the girl who is dangerous? Is it a tease or a threat? What will happen?

Two admirable qualities in Eskridge's film are her discretion and subtlety. Many contemporary audience members will expect explicit gore and literal violence. But Eskridge deflects those qualities.

Almost all of her violence is off-screen. It's one of her strengths. She's a deft necromancer.

She's also subtle. She doesn't explain everything. Why is Jennifer seemingly surprised by a body? Eskridge lets the imagery tell the story. This keeps the film thought-provoking.

Even in simple scenes, she doesn't show everything. When Jennifer is in a shop she stands in front of two small, pink booties hanging on a hook. When she leaves the shop, they are gone. But we don't have to see her lifting them. And they're symbolic.

One scene in which she is perhaps a little too discrete is after sex, a man gets up with his underpants still on. But one could argue this does fit the characters.

The actors are serviceable, but occasionally amateurish. At times their speaking is flat or dissonant. And their conversations sometimes lag.

Gabrielle Stone gives a credible performance as the addled woman, who desperately seeks control. Sometimes the dialogue gets in the way. The film lags when the impact of Jennifer's mania wanes and conversation takes over.

The writing on occasion is clever, such as when one character says, "Life got in the way," and the other hears it as, "ballet."

But Eskridge's forte is not dialogue - it is visual. Eskridge has a great visual sense. Well-served by director of photography David Landau, Eskridge puts her personal stamp of the film with bright lighting. Sinister actions happen in brightness. Light prevails over darkness - it's a deft artistic choice. Stray is a tale of well-lit perversity.

May audiences see the light.

The Light of the Moon