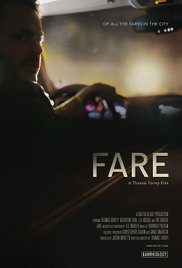 Fare is representative of the independent film today. It shares many of the trials and dilemmas of that aspiring category.

Indie filmmakers face a hard, rocky road that often ends in a cul-de-sac.

These filmmakers almost always have limited experience and very limited budgets. They often have to take shortcuts and trust the tolerance of their viewers.

How do they get recognition? Often reviewers don't have the time or inclination to take the bumpy ride with them. [In the case of Fare, promoter Dan Harlow persisted and got me to watch the film.]

Fare takes place at night in a car, which immediately imposes restrictions. The car is used as a taxi by Eric (Thomas Torrey). He is having identity problems. And marital stress. Lots of luck having discussion of love and marriage with strangers in a car.

The dialogue has to carry much of the film. But only one passenger expresses dialogue that is lively. He is the only one who sits in the front seat with Eric and speaks in a lilting accent.

The main conversation is with another Fare (J.R. Adduci) who reveals his philosophy of love and sex. He and Eric have an ironic bonding, which evolves into severe distress.

Since Fare is written, directed, and acted in by Torrey, it's his personal offspring. The personal vision is an asset.

Fare was shot in 3 days, with all cameras inside the car. It's a notable accomplishment, but obviously budget limits finesse. Eric keeps looking forward to his left - as in a rearview mirror - but the passenger sits in the right of the back seat.

Casting is one of the major problems of indies. Torrey casts himself as the lead. Even Marty Scorsese only appeared in a cameo in Mean Streets (1973). Torrey is serviceable as Eric, but the plot and setting limits his range. How many expressions can one have driving a car? Ok, there was Tom Hardy.

But when Eric's wife (Katherine Drew) joins him in the car, the chemistry is nil. They are married? Drew seems to be a good actress, but she's not that good.

In Stray, an indie I admire, director Nena Eskridge had to replace her leading actress, who wasn't available for shooting. She replaced her with an able actress, but one wonders what the original choice might have done.

One wonders what different casting might have provided in Fare.

Throughout Fare, credibility bounces. It's up for grabs. But the film is a step forward. An Indie step.

One of the major obstacles indie filmmakers face today is competition. It's not competition from the industry that spends millions of dollars on its films, when the independents can't afford $50 thousand. The real competition is from television.

Cable television provides the access to what independent films try to represent. Contemporary cable television is perhaps a bit like the Golden Age of films in the 1970s. It is creative, imaginative, and bold.

The Tunnel, Broadchurch, and the like, these days do things that commercial tv has never done. The Tunnel has dialogue that would never be spoken on commercial tv. Recently, in a scene in which a group of young people from different ethnic and religious backgrounds gathered, one Christian girl criticized another girl for wearing a Muslim headscarf. The Muslim girl responded that the Christian girl wore a "torture object" around her neck. That's a line that would never be on commercial television.

Broadchurch recently had a scene where a tormented killer and his young victim's tormented father had a "bonding." It was daring but credible.

I watch a lot of international television mystery programs on MHz Choice. It's remarkable how much literate, intelligent programing one can find. Some of my choices are The Eagle (Danish), Bukow & Konig (German), The Passenger (French), Corp & Anam (Irish), Lackberg's Fjallbacka Murders (Swedish) and also Wallander (Swedish). And, of course, the delightful Inspector Rex (Viennese German).

Competing with the unique, quality programing on contemporary television is a new obstacle for independent filmmakers.

The Light of the Moon